Review - Camden Fringe: One For My Baby 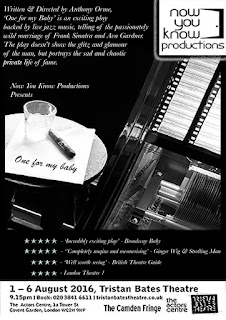 VentSpleen discovers that One For My Baby is much more than one more for the road as he watches the play by Now You Know Productions at Camden Fringe...

"Everyone wants a piece of you, Frank. I just don't want my piece any more"

Think you know Sinatra? Think again, because, while you are familiar with his songs and incredible talent, his private life is about as far removed as it could be from the stage persona he crafted. One For My Baby focuses on Sinatra's relationship with Ava Gardner away from the glitz and glamour of their careers.

The attraction and wonder of lower budget, studio Theatre is that the minimal staging pushes the focus firmly to the actors. A show's ability to retain an audiences attention is entirely dependent on the talent of the cast and their skill in telling the story with the sparsest of sets. One For My Baby is set in a bar that Sinatra regularly visited to escape his hectic lifestyle as well as avoid the invading eyes of the press. The stage set with a bar, booze and two bar stools means that for the shows 45 minute running time all eyes are on Sinatra, the real Sinatra. 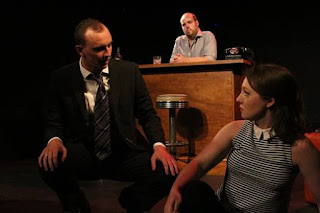 Matt Concannon is outstanding in his portrayal of Sinatra, the man rather than the confident and accomplished singer. This is a broken and vulnerable man who has lost the lady of his dreams and is struggling to adjust to a life that seems empty and drab without her. It is a hard task indeed to play a broken man, it is more than emotion and much more than a fleeting facial expression. Watching Concannon's defeated Sinatra drowning his sorrows in a run down bar is a heart wrenching experience. As he retells how he came to meet Ava and relives their shared moments the audience feels every moment of joy and love but this makes the crash down to reality so much more painful. This is not Sinatra triumphant and riding on the successes of his incredible career but a Sinatra that has had his heart ripped from him. It hurts to watch and it is supposed to! Concannon is an actor of incredible range and his portrayal of Sinatra's infamous temper is as effective as the true and deep running affectionate moments with Ava. One For My Baby is not a tribute show and, by avoiding the easy mistake of trying to mimic Sinatra's voice, Concannon brings out the tragic beauty of the story with his own powerful vocal ability.

Ava Gardner is beautifully brought back to life by Emily-Jane Ashford, I have previously enthused about how great an actor she is. Her performance as talented but vulnerable Gardner is an absolute delight and Ashford's hauntingly gorgeous singing voice completely seduced the audience. The onstage chemistry between the two leads was totally believable and I shall remember their remembered first date for a long, long time. Writer/Director Anthony Orme also showcases his talent as an actor and it is retelling of the broken Sinatra's visits to his bar that forms the back bone to the show. Orme's portrayal of Joe as a caring bar keep who's sympathetic ear Sinatra uses whilst he relives his ended marriage with Ava. His loyalty to Sinatra remains long after his visits stop yet he craves a different kind of closure. Joe McCarthy ably assists the story and plays multiple support roles so effectively that, with a simple change of hat or shirt, it never feels confusing as to which character he is playing. 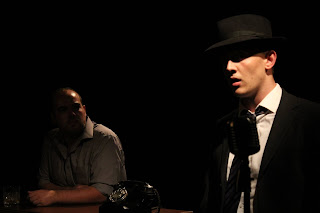 The decision to include live jazz music within the show is a bold move, but at no stage does the music overpower or detract from the focus of the play. Utilising the bar's juke box works perfectly as the well known songs of the time are played expertly by the musicians. Colm Molloy is an accomplished jazz pianist and is supported by Monika Vallunaite's raunchy saxophone. Somehow, using recorded music would have not seemed fitting when Sinatra and Gardner are the focus of our attention. It is the passionately fiery relationship that Sinatra and Ava enjoyed that takes centre stage and the weight of their celebrity status that eventually destroyed it. The strikingly tragic image of Gardner, drinking heavily, after being forced into an abortion by a studio who cared more for their star's worth than her happiness has never been more starkly portrayed. The audience are led to feel every moment of her "vignette of pain" as Sinatra painfully remembers. As Gardner tells Sinatra ,before she leaves him, "its not you, it's just that our fires are burning differently now". Sinatra left Nancy for Gardner and they both dreamt of a life together, yet this reality was ripped from them. One For My Baby portrays two hugely successful and exceptionally talented stars who were unable to find the only thing that money could not buy. When the spot lights have dimmed and the audiences have left, Sinatra desired the life long love and support of a woman he fell in love with the first time he saw her. The tragedy being that his success and popularity led this to become impossible.

Now You Know Productions have two shows at The Camden Fringe this year. You can read my review of 1 in 3 here and I would recommend that you book tickets if you haven't already. One For My Baby runs at the Tristan Bates Theatre until Saturday 6th August and you can book your tickets here