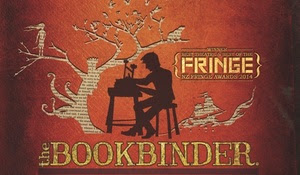 Coming to The Pleasance at Edinburgh Fringe from tomorrow, here's what VentSpleen thought of The Bookbinder when he watched it at Brighton Fringe in May...

If Brighton Fringe stands for anything it has to be diversity, a term used here in its purest form. There are plays that tackle difficult and challenging subjects that would certainly be aimed at a more adult audience. Equally there are plays that are designed to capture the hearts and minds of children and workshops which will develop their creativity. What interests me are the plays that seek to enchant both adults and children and this brings me to The BookBinder. Produced by New Zealand based company, Trick Of The Light, The BookBinder is a dark and strikingly original fairy tale which simply astounds and beguiles right from the outset.

The BookBinder is a one man show that weaves its spells by utilising puppetry and an exquisite use of light and shadow. As the audience take their seat in a dimly lit room we are instantly transported back in time. Music is emanating from a gramophone in the corner and the Book Binder himself is asleep at his tall desk. Seemingly woken by the noise of the audience he greets us as if we are enquiring about a job as an apprentice. With this simple device The BookBinder breaks down the fourth wall and the audience are transformed from mere voyeur to active participants. In telling his tale the Book Binder is conducting an interview and ascertaining our suitability for the role. Ralph McCubbin Howell is instantly engaging as the Book Binder,portraying a man that is warm and caring but with a darker edge that hints that this is no ordinary Bindery. With the play being set in such a confined space it would be easy to think that this would be a very difficult story to convey without huge lavish staging and supporting cast.

This would be an understandable opinion but it would be entirely wrong. The story is told from within the pages of an actual book and the use of finger puppets to portray the characters is astounding. As the book springs to life and characters literally spring from the very pages this soon becomes one of the most exciting and involving story telling experiences I have ever seen. The story is lit by a long armed lamp which McCubbin Howell uses to portray the sun and produces the striking shadows which feature so prominently. The book itself is a work of art and closer inspection shows the intricate detail that has been painstakingly created within its pages. This is so much more than a plot device it becomes the story itself but never feels over used as both the book and McCubbin Howell's expert story telling skills work in perfect unison. The BookBinder is written by McCubbin Howell and Hannah Smith, who assumes Directorial duties for the play. There is a wonderful confidence with the material without ever straying into a casual over familiarity. The BookBinder is brilliantly paced and doesn't lose the audience at any point in its hour duration. 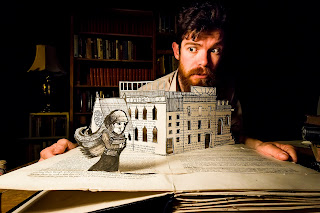 Once again I find myself in awe at the sheer enormity of what can be achieved with tremendous acting and a strong and engaging story. Pub Theatre and Fringe share a common strand in that, by focusing on the key elements of artistic creativity, they bring back audiences to what really matters. Strong, powerful and heart warming performance that achieves what so many over priced shows fail to, the audience loved every minute of it! I strongly urge you to find out when The BookBinder is being performed near you and experience this fabulous production for yourself. Pull up a chair and, if it gets too late, you can sleep under the guillotine!

Images - Trick of the Light Theatre

The Bookbinder is on at the Pleasance, Edinburgh from 3rd - 29th August. Tickets and more info here.
Email ThisBlogThis!Share to TwitterShare to Facebook