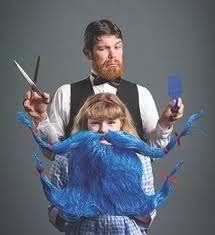 From the same company that brought you The Bookbinder, a musical which has the oddest concept at its heart. Putting the fringe back into Edinburgh Fringe from today, VentSpleen saw Beards, Beards Beards in Brighton...

Beatrix is a girl with one single ambition in life, she wants to grow a beard! Her two dads run the most successful Barbers shop in the land and she has come to believe that the only people who are listened to are those with facial hair. Guided by Wilgefortis, a Super Saint with a beard that would make Z Z Top jealous, she embarks on a roller coaster ride into the past to meet with inspirational beards throughout history. On a kind of hairy journey of self discovery, Beatrix discovers that to be truly content in life its not so much about being a beardy but being yourself, or something like that! 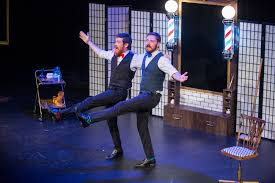 Trick Of The Light have conceived a musical that manages to be both innovative, funny and engaging whilst having its tongue firmly lodged in its hairy cheek. The musical numbers are fantastic and impossible to remove from your head (I purchased the soundtrack album and it's been playing constantly for days) Ralph McCubbin Howell has demonstrated his versatility as a writer and as a performer and he simply ignites the stage with his hairy silliness. Partnered with Paul Waggott, McCubbin Howell sparkles and delights with the sort of over the top musical farce that just makes me grin. In fact, I don't think I stopped smiling for the entire hour duration of Beards, both children and adult alike will find much to entertain. Abby Howells is perfect as Beatrix and her musical numbers are wonderfully endearing. I found myself feeling strangely sad for her plight during Smooth Face/ Broken Dreams, only to be laughing again as McCubbin Howell and Waggott accompany with Beardy Bee Gee like glee. Beards, Beards, Beards is a delight from start to finish and is a production that I want to revisit if I have the chance. With a full Edinburgh Fringe run from 4th August to 28th August at Assembly Roxy I would strongly recommend you take the opportunity to see it. Beards, Beards, Beards is a cut above the rest!

Images - Trick of the Light

Edinburgh Fringe Tickets and info from here
Email ThisBlogThis!Share to TwitterShare to Facebook