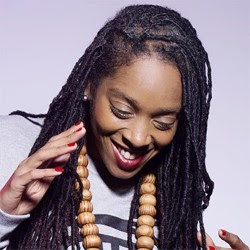 Any visit to a Fringe Festival isn't really complete without a stand up performance. Coming to Edinburgh Fringe this weekend, Athena Kugblenu's show was watched by VentSpleen at Brighton Fringe...

I'm old enough to remember Newman And Baddiel when they were funny together and The Mary Whitehouse Experience was cutting edge. A few years after they had parted company I took the opportunity to watch Rob Newman perform but something had happened. He had gone all political and, whilst that wasn't an issue by itself, the fact that he wasn't funny anymore very much was. Political observed comedy can be a mine field as, if its poorly delivered, it can just come across as ranty and preachy. Taking my seat for Athena's work in progress show I had a feeling that this was a particular minefield that she would successfully navigate through, but you can never be entirely sure. For those of you who aren't familiar with the term 'work in progress' I should explain that it provides artistes with an opportunity to hone their routine in front of an audience. It also lets the public know that some of the routine or jokes may not hit their mark and that's o.k as it's a refining process.

From the moment Athena took to the mic she had the audience where she wanted them and what followed was 40 minutes of brilliantly paced and astutely observed comedy. Coming from a mixed race background she is perfectly placed in her observations of the issues surrounding racial diversity. This can be a touchy issue and it is easy to alienate audiences with a hard line whilst going to light can mean that you end up making no point at all. Athena landed her comedic punches with a skill that hugely impressed me and left me wanting to see more from this talented lady. At times touching on personal experience which allowed us to see her vulnerable side, Athena has a wonderful way of delivering edgy comedy whilst still developing her own style. My issue with stand up comedy is one that I think I share with others in that I can never remember the specifics of what makes me laugh. This is no way a criticism of Athena, more one of my failing memory, you will just have to take the opportunity to catch Athena's performance for yourself.

Athena Kugblenu is an intelligent and engaging comedian who made me laugh but, more importantly, she also made me think. I have always believed that the best way to get a serious point across is through the medium of comedy. Athena is a comedian that proves my point!