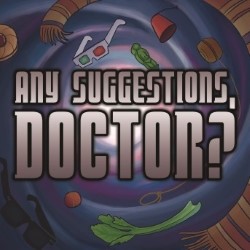 Susan Omand charged up her sonic screwdriver and watched Any Suggestions Doctor: An Improvised Adventure in Space and Time at Sweet Venues...

I have a problem with improv theatre. If it’s bad, it’s an unsalvageable shambles akin to that Christmas party game you had to play when you were a kid, only funny because if you didn’t laugh at it, you’d cry. If it’s good, it looks so smooth that you think it’s been scripted and rehearsed with nothing to tell you otherwise and would have to go two nights running to see if it was any different. So I always feel that improv is trying to be a bit too clever for its own good.

However, I keep persevering with it, finding an improv show to go to every year that I’m in at the Fringe, hoping against hope that one year I would find that elusive show, that one that you know is neither scripted nor rehearsed but still manages to be entertaining for all the right reasons. And I must admit that the concept of Any Suggestions Doctor intrigued me; an off the cuff, parody Doctor Who episode, invented to suit a title suggested by that day’s audience. I mean, it couldn’t be any worse than the majority of real episodes from series 9 now, could it?

As I took my seat in one of the bigger theatre spaces in Sweet Venues I was impressed by the wide range of people in the almost capacity audience, male and female, children and adults. Using a recognised franchise seems to have paid off on getting bums on seats initially. Then the to-be-expected Doctorin’ the Tardis background music faded out and the five performers (why don’t Fringe shows include a list of performers’ names on their flyers?!) exploded on to the stage and I do mean exploded – running around, high-fiving the front row, whooping and shouting. Anyone would think they were really looking forward to this. I felt old.

Soon it was down to business and this is where it got interesting for me because, as well as taking written title suggestions from the audience prior to the show’s start, there were also decisions made on the fly, with the use of the cheer-o-meter. We got to choose which of four of them was the Doctor (the fifth person I assume having been the Doctor the previous day) by cheering for their choice of favourite children’s book – “The Hungry Hungry Caterpillar 2: Electric Boogaloo” won it for me, and for the rest of the audience, which meant that Charlie was the Doctor this time round. And we also got to suggest various “space and time” periods in which the adventure was going to take place. My favourite suggestion of “the set of Tomorrow’s World while the programme is being recorded” wasn’t picked but then I realised that half the audience and all of the people on stage probably had no idea of what Tomorrow’s World actually was as a show and I promptly felt old. Again. Instead, the dinosaurs won out (no, before you ask, I’m not THAT old) so I settled back to see if this version of Doctor Who Does Dinosaurs on a Spaceship would be better than Chibnall’s.

It was. Oh yes. It definitely was.

In fact it was way WAY better. There’s no point in telling you the plot of Doctor Who and the Revenge of the Rabbits, which was the audience suggested title for  that day, as you’re never going to see the same tale I saw but it was absolute genius. You could tell that it wasn’t scripted as slight mistakes, like an unfortunate choice of hat, and slips in pronunciation were picked up on by the others in the cast and used to further the dialogue to hilarious effect and the recovery from these was incredibly well handled. The props too seemed to spark more story ideas like an orange wig, used to represent an early cretaceous flower, spawned a side plot that led to the evolution of the Scottish race from the Doctor’s companion. All five people involved sparkled on stage and honestly they looked like they were having as much fun delivering the show as the audience did watching it.

So well played ASDImprov, you’ve done what countless other improv shows before you have failed to do. You have converted me from being an improv hater to the point where I will say Any Suggestions Doctor is my recommended show of the Fringe so far. If all improv was as good, as funny, as clever and as well executed as this, the universe itself would be a happier place. But it’s not and it's not, so please, please go and see the best improv team in space and time while you can.

Go and see Any Suggestions Doctor from 4th - 14th, 16th - 21st, 23rd - 27th of August at 15:55 at Sweet Venues. Visit the website for more information and to book tickets.
Email ThisBlogThis!Share to TwitterShare to Facebook