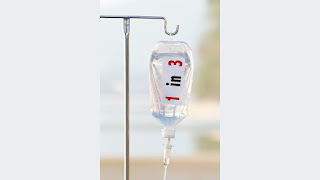 Sometimes theatre doesn't just entertain it connects in such a powerful way that you leave a different person. For VentSpleen, when he watched 1 in 3, on at Camden Fringe this week, this was one of those times...

When I was 19 my Grandad lost his fight against cancer, it doesn't matter which one because all forms offend me by just continuing to kill. Throughout his brave battle he was supported by some of the most compassionate and caring people I have ever met. The nurses, Doctors and palliative care staff are often unnoticed by all except the patient and family members. I noticed! Thank you all of you, thank you.

1 in 3 is a Crowd Funded play that tells the story of two patients as they fight their own battle with cancer. Their lives couldn't be more different but the life threatening nature and sheer magnitude of their struggle is the same. Jeff is a successful 41 year old business man who married his child hood sweetheart. A loving family man what has had his life decimated by cancer. At his first chemotherapy appointment he is alone, protecting his wife as she struggles to come to terms with what has happened. He meets Jasmine, a feisty 17 year old, who's astounding positive attitude hides the tragedy of her past. Jeff is going through his first ever experience with chemotherapy but Jasmine? Well, this is her third!! The play chronicles a 6 month period of chemotherapy appointments and suddenly, two very different people, from very different worlds are supporting each other in a fight for survival.

David Keogh is simply sublime in his portrayal of a man who is terrified he is about to lose everything. His believable performance so powerfully resonated with the audience that we felt every tear and every heart cry. Alice Merivale's astonishing Jasmine is such a profoundly moving characteri that the plays end left me moved to tears. Here to, the support nurses and doctors are brilliantly and accurately played as human beings with heart and soul who move heaven and earth to provide essential care. Emily-Jane Asford is wonderful as Sam, the nurse with a heart that must surely break constantly and Laura Ellis shines as the caring and professional Doctor.

Anthony Orme, Writer and Director has put together a production that changes you at your very core and forces the public to confront the reality of 1 in 3. We will all be effected by the touch of cancer and we need to get serious about it, if we aren't already. Also of significant note is the demystifying of the actual treatment. I wonder how many realised that chemotherapy is usually delivered by a drip and not by impressive equipment. The challenge to live life and not just survive it was powerful and one that I passionately believe in. 10% of all profits are being donated to Cancer Research. Get along and see it. Let's make that cheque a big one!

Anyone who says that low budget Theatre is not relevant needs to see this, because the bar just got raised oh so much higher.

1 in 3 is performing at Camden Fringe from Monday 15th - 19th August, Upstairs At The Gatehouse