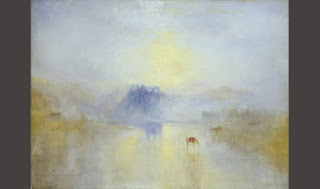 Having travelled over 12,000 miles and been seen by over three-quarters of a million people in the UK, USA and Canada as part of The EYExhibition: Late Turner – Painting Set Free, these masterpieces have now gone back on show in a new free display. Returning works include much-loved oil paintings like Norham Castle – Sunrise c.1845 (above), Peace – Burial at Sea exhib.1842, and The Dogano, San Giorgio exhib.1842. The new display features over 100 works across eight rooms of the Clore Gallery at Tate Britain, the home of Turner’s work in the UK.

One of Britain’s most renowned artists, Turner is a key figure in the history of painting and an inspiration to many generations of artists. The three central spaces of the Clore Gallery present an overview of the major paintings he exhibited during his lifetime. They include spectacular images such as Snow Storm: Hannibal and his Army Crossing the Alps 1812 and Peace – Burial at Sea exhib.1842. Turner’s Self-Portrait c.1799, which will feature on the Bank of England’s new £20 banknote, is also be a highlight of these galleries. The painting depicts the artist as a young man and is believed to mark his election as an Associate of the Royal Academy at the age of 24. Turner was selected for the new banknote design in April 2016 after a public nomination period and deliberation by the Banknote Character Advisory Committee.

Located on either side of this central display, four smaller galleries present themed groups of work. One room brings together scenes from Turner’s travels around Britain – from the Lake District in Cumbria to the Tamar Valley in Devon to St Giles’ Cathedral in Edinburgh – while another room explores his European tours to France, Germany and Italy, showcasing luminous visions of Venice including The Sun of Venice Going to Sea 1843. A group of the radical late works found in the artist’s studio after his death are shown together, including loosely painted landscapes and atmospheric images of light and shade such as Norham Castle – Sunrise c.1845, as will some of his most celebrated depictions of stormy seas and breaking waves.

There is also a new display of the artist’s works on paper, chosen from the thousands of sketches and watercolours held in Tate Britain’s Prints and Drawings Room. This selection focuses on Turner’s treatment of urban scenes from cities such as London, Paris, Naples, Rome and Venice.