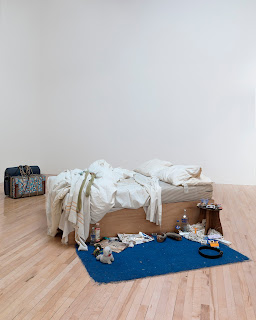 This autumn, Tate Liverpool focuses on the work of Tracey Emin (b. 1963) and William Blake (1757-1827) to reveal surprising links between the two artists...

The free display puts together important works from the Tate collection, demonstrating a shared concern with spirituality, birth and death in both artists’ work.

Tracey Emin was born in London in 1963 and studied at Maidstone College of Art and the Royal College of Art, London. Associated with a generation of celebrated British artists who emerged in the late 1980s, she is known for making works that convey experiences and events from her own life by using a range of media, from needlework and drawing, to sculpture, writing and installation. Her artwork is exhibited all over the world but is also displayed more locally and her neon work For You 2008 and bird sculpture Roman Standard 2008 can both be seen at Liverpool’s Anglican Cathedral.

In contrast William Blake was an artist, poet, radical thinker and visionary, working at a time of great social and political change in the late 18th and early 19th century. He was born in Soho and spent most of his life in London, where the city and its people inspired his fantastic, and at times nightmarish, visions. The gift and bequest of more than twenty of Blake’s works by the writer and artist W. Graham Robertson (1866–1948) together with many other individual purchases and gifts means that Tate holds one of the world’s most important collections of Blake.

At the heart of this new display is one of Britain’s most infamous artworks of the past 20 years, Tracey Emin’s My Bed 1998. This will be the first time My Bed has been displayed in the north of England.

Featuring Emin’s own bed with stained sheets, personal objects and detritus, it offers an unflinching self-portrait in which the artist herself is absent. Combining public with domestic realms, this iconic work expresses ideas of containment and isolation while asserting the artist’s thematic preoccupations, including birth, death, dreams and sex.

My Bed, along with drawings by Emin from the Tate collection, will be presented alongside those of the visionary British poet and artist, William Blake. Presented in the context of Emin’s empty bed, and symbolising the absent figure, works include The Blasphemer c.1800 and The Crucifixion: ‘Behold Thy Mother’ c.1805 and other figurative works.

Blake stood against the hypocrisies of his age and was vocal in his support of liberalism, sexual freedoms and above all advocated for unrestrained imaginative freedom of expression. The new display affirms Blake’s Romantic idea of artistic authenticity through existential pain and the possibility of spiritual rebirth through art shared in the work of Tracey Emin.

Following the display of My Bed 1998 at Tate Liverpool, the work will be shown at Turner Contemporary in Margate, Emin’s home town. This will provide a unique opportunity for audiences across the UK to see one of the most defining works of British art in recent years. The Duerckheim Collection acquired the work in early July 2014 and it is now on loan to Tate for 10 years.

Tracey Emin and William Blake in Focus is curated by Darren Pih, Exhibitions & Displays Curator, Tate Liverpool and is free to visit from 16 September 2016 to 3 September 2017.