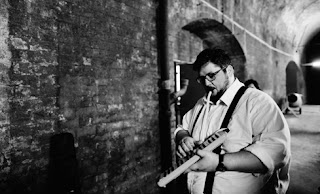 John De Simone is to be sound’s first composer in residence announced as the acclaimed new music festival unveils its 2016 programme...

John, who studied at Louis Andriessen's renowned composition department at the Royal Conservatoire in The Hague, will create new work for the 2016, 2017 and 2018 festivals beginning with a piece that will be premiered in a concert alongside Andriessen’s seminal De Staat. Performed by Red Note, I Solisti del Vento (Belgium) and Song Circus (Norway) the programme will be performed at soundfestival, in Belgium and in The Netherlands.

“We are pleased to confirm that John De Simone is to be our first composer in residence,” says Fiona Robertson, Director of sound. “Commissions are at the heart of new music and sound has always been committed to working with and where possible commissioning new work from Scottish and international composers. Through the composer in residence initiative we will be able to develop a much deeper musical relationship with one composer. We are excited to set out on this fascinating journey together.”

A Scottish-Italian composer, whose grandfather John MacCormick was instrumental in the founding of the Scottish National Party, John De Simone is also director of Ensemble Thing, which he founded in 2004 which has become one of leading new music groups in Scotland.

“I am absolutely delighted to be offered the opportunity to be sound’s composer in residence for the next three years,” says De Simone. “In addition to writing music I am looking forward to taking an active role in sound throughout the duration and in particular with the community that sound supports and is supported by. I welcome the opportunity that the residency offers to develop a significant body of work. Having the time and space to develop a practice is a rare opportunity for any composer. I’m looking forward to reflecting and innovating, through writing for new modes, collaborations and instrumental combinations.”

The 12th annual celebration of new music will run from 20th October - 6th November 2016 in venues across Aberdeen and Aberdeenshire. Highlights of the festival include:


- Celebrations of work of two of the great 20th century composers, Sir Peter Maxwell Davies (four specially commissioned pieces to be performed on the opening night of the festival by Rolf Hind) and Pierre Boulez (a daylong event on 5 November including a screening of Roger Graef’s film Who is Pierre Boulez).

- The world première of a new work by Graham Fitkin for string quartet and harp to be performed by Ruth Wall and the Sacconi Quartet and as well as the Scottish premiere of his work Disco, a 1970s disco-inspired “song cycle” for soprano backed by three countertenors. Ruth Wall will also be premiering pieces for clarsach by Sally Beamish and Snorri Sigfús Birgisson (commissioned by sound for the Aberdeen Harp Project).

- A Discovery Day in partnership with the Aberdeen Science Centre exploring the science of sound which will be led by composers and sound artists Pete Stollery, Duncan Chapman and Bill Thompson.

- A new work by David Hudry co-commissioned by sound as part of its ongoing relationship with Clermont Ferrand’s Musiques Demésurées festival. It will be performed by Tana Quartet on 29 October as part of a four-day celebration of contemporary string quartet writing.

Several of the works to be premiered at the 2016 festival have been commissioned through sound’s soundbytes initiative which enables more people to be actively involved in the commissioning of new music.

Alan Morrison, Head of Music at Creative Scotland, said, “sound is a brilliant example of creative excellence and community engagement, innovation and experimentation, and this year's programme promises to deliver a one of the strongest festivals to date. Not only does sound make an important contribution to commissioning new work that resonates throughout Scotland and internationally, it also plays an important role within the cultural infrastructure of Aberdeen and the North East.”

For the full programme visit www.sound-scotland.co.uk.