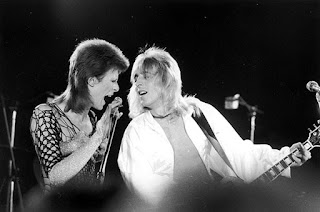 Getty Images Gallery, in the heart of the West End, has announced SOHO, a new exhibition that unearths rare imagery of the famous entertainment district in London during its heyday...

Soho has long been notorious for its night life and reputation as a base for the sex industry in London, characteristics which made the area a popular haunt for celebrities, artists and musicians alike. An exhibition which will be eye opening for many and a trip down memory lane for some, SOHO juxtaposes the district’s seedy underbelly with the hustle and bustle of everyday people on the street through a series of beautiful photographs carefully selected from Getty Images’ vast historical archives.

Featured in the exhibition are images of iconic musicians, including David Bowie as Ziggy Stardust performing his famous gig at The Marquee Club on Wardour Street in 1980, and jazz greats Dizzy Gillespie and Miles Davis performing at the renowned and ever popular Ronnie Scott’s Jazz Club. Along with photographs of Soho’s glamorous nightlife, the exhibition brings to light images of the everyday local communities of Soho’s past: shoeshines, street cleaners and city workers.

The exhibition came to life after the discovery of a glass-plate from 1910 called ‘The Smallest Shop’, which was situated at 4 Bateman Street in Soho. This tiny shop measured only six feet long, five feet high and two feet deep. The shop’s novelty caught the attention of the Getty Images Gallery, whose researchers began a yearlong project to mine the archives for more pictures that encapsulate the fascinating history of this truly iconic area.

SOHO is a celebration of the diverse faces that helped establish the area as one of London’s most famous villages and a reminder of the importance of preserving the area’s rich architectural and cultural history into the future.

SOHO runs from 22nd September – 19th November 2016, and admission is free. Getty Images Gallery is situated in central London, just a stone’s throw away from Oxford Circus. Opening hours are from 10.00am to 5.30pm, Monday to Friday, 12.00pm to 5.30pm Saturday.