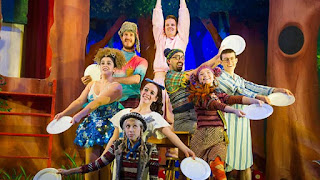 This Christmas (yes we know it's still only August), Peter Pan is coming to BBC One - but it might not be what you expect...

As part of its commitment to community theatre, the BBC has allowed The Cornley Polytechnic Drama Society, an amateur dramatics group, to put on a show as part of their festive programming. But can they pull it off? Filmed in front of a live audience, who are watching as Peter Pan flies through the air, Captain Hook and his pirates set adrift in the lagoon, and Tinkerbell is due to light up the stage in a stunning electrical costume… what can possibly go wrong?!

With their trademark comic mayhem expect hilarious stunts, chaos, technical hitches, flying mishaps and cast disputes on the way to Neverland with hilarious and disastrous results.

Mischief Theatre was founded in 2008 by Henry Lewis and Dave Hearn, graduates of The London Academy Of Music And Dramatic Art (LAMDA) and began as an improvised comedy group.

Chris Sussman, Head of Comedy, BBC Studios, said “Peter Pan Goes Wrong was one of the funniest shows I've ever seen in the theatre and I'm thrilled we've got the chance to bring it to BBC One. Terrifying stunts, a revolving stage and a cast who've never done TV before. What could possibly go wrong?”

Mischief Theatre adds: “We are delighted to be bringing the mishaps of The Cornley Polytechnic Drama Society’s production of Peter Pan Goes Wrong to BBC One this Christmas. We are quite staggered at the success of the simply disastrous stage shows this company keeps putting on and hope that their attempt at television doesn’t ruin the nation’s festive cheer!”