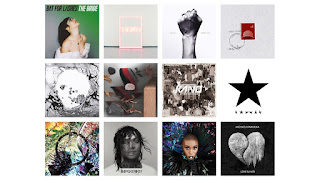 Yay, we've heard of some (but only some) of the nominees for the Mercury Music Prize this year...

The 12 shortlisted records have been revealed for the 2016 Hyundai Mercury Prize ‘Albums of the Year’ with BBC Music, official UK broadcast partner.

Speaking about the shortlist, the judging panel said “This is music to make sense of our unsettling times - heartfelt, angry, thoughtful and thrilling. The 2016 Hyundai Mercury Prize ‘Albums of the Year’ are marked by their musical ambitions, unexpected instrumentation and breathtaking arrangements.”


Hopelessness by Anohni
The Bride by Bat for Lashes
Blackstar by David Bowie
Making Time by Jamie Woon
Made In The Manor by Kano
The Dreaming Room by Laura Mvula
Love & Hate by Michael Kiwanuka
A Moon Shaped Pool by Radiohead
Adore Life by Savages
Konnichiwa by Skepta
I like it when you sleep, for you are so beautiful yet so unaware of it by The 1975
Channel The Spirits by The Comet Is Coming

There will be a specially-made programme for BBC Red Button featuring all 12 of the shortlisted albums, plus further content online and via the BBC Music app. An online vote - new this year - for the public to select one of these albums to make it to the final six is now open.

The six finalists (including the album voted for by the public) and the overall winner will be announced at the Awards Show on Thursday 15th September at Eventim Apollo, Hammersmith. BBC Four will broadcast the Awards ceremony live in an hour-long special - Best Album of the Year 2016 - Mercury Prize Live - presented by Lauren Laverne and BBC Radio will have more extensive coverage.

Over the course of the show, Lauren will reveal the six finalists and introduce their performances on stage. The programme will also reflect back across 25 years of the Mercurys, marking this milestone anniversary of the prestigious Prize, and culminates in the thrilling moment the winner is announced live.

Lauren Laverne said “This is a brilliantly diverse list of albums vying for the title Mercury Prize ‘Album of the Year’. I’m excited to be involved again this year, revealing the shortlist in my 6 Music show today and presenting the Awards themselves live on BBC Four. I can’t wait - it’s going to be a wonderful night of music.”

Visit http://www.mercuryprize.com/voting to vote for your favourite from the list above.