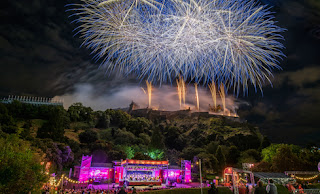 The Edinburgh Festival wrapped up with a bang on Monday night after one of their most successful years...

Audiences have packed theatres and concert halls across Edinburgh, with the International Festival taking over £4million in ticket sales income for the first time. Classical music ticket sales in particular enjoyed a record year, with the Queen’s Hall series achieving its highest ever sales.

Free, outdoor events such as the Standard Life Opening Event: Deep Time and the closing Virgin Money Fireworks Concert take the International Festival outside of the city’s established venues. Approximately 27,000 people attended the Standard Life Opening Event: Deep Time, which saw Edinburgh Castle transformed by digitally animated projections inspired by the city’s past, created by 59 Productions. An estimated audience of 250,000 enjoyed the Virgin Money Fireworks Concert performed live by the Scottish Chamber Orchestra in Princes St Gardens, and watched by many others across the city as the music was broadcast courtesy of local radio station Forth One.

The 2016 International Festival saw top rated shows and incredible performances across the programme. Artists at the top of their game enjoying phenomenal success included world-renowned mezzo-soprano Cecilia Bartoli in Bellini’s Norma which opened the Festival programme; actor Cherry Jones in John Tiffany’s production of The Glass Menagerie; pianist Daniil Trifonov proved both his virtuosity and versatility across three programmes at the Usher and Queen’s Halls; prima ballerina Natalia Osipova transfixed audiences by taking a new direction in her specially commissioned contemporary dance programme; and performer James Thierrée brought incredible genre-busting energy to the stage in The Toad Knew.

Though rooted in the city centre, the International Festival reaches into wider communities and throughout August worked with local school children of all ages, taking artists and workshops into schools, as well as bringing pupils to Festival shows. The International Festival’s Young People’s Jury of 25 pupils from six Edinburgh High Schools attended – and judged in their own inimitable style – 19 performances across the programme. The International Festival also moved outward from the city centre into locations across Edinburgh and the Lothians with Songlines, an event which saw communities take part in a unique celebration of singing, featuring 12 choirs and soloists across 8 venues stretching from Dalmeny across Edinburgh to Haddington.

The 2016 International Festival programme also included the Edinburgh International Culture Summit, a biennial event which brought together culture ministers, artists, thinkers and arts leaders from around the world. Policy makers underlined the value of placing arts and culture at the heart of both local and global communities, and reinforced their commitment to the arts and cultural industries as vital means of international cooperation and exchange.

Councillor Richard Lewis, Edinburgh’s Festivals Champion, added "It has been another fantastic summer in Edinburgh and the International Festival’s figures speak for themselves. A staggering number of artists and Festival workers have created what can only be described as one of the most vibrant, inclusive programmes in the event’s 69-year old history. Thanks must go to everyone who made this year’s International Festival such a great success, the many people working hard behind the scenes to keep the city moving and the tens of thousands of visitors to Edinburgh."