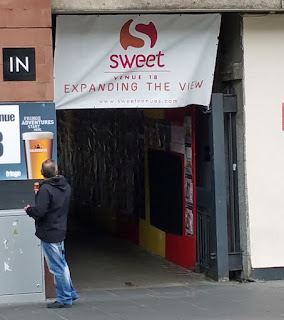 It may be dull and overcast everywhere else but as soon as you pass under the archway at Fringe Venue 18, beside the Apex Grassmarket Hotel, there’s a party going on! Susan Omand reports on the Sweet Venues launch for 2016...

Yes we’re back in Edinburgh for the launch of the 2016 Edinburgh Fringe Festival, Sweet Venues style. As I walk up the ramp to the door of the venue, the walls are covered with posters and it was heartening to see that some of them already had “sold out” stickers on them already. A quick pre-launch chat with Annie Marrs, Press and Marketing Director for Sweet Venues, confirms that yes, they are already busier than last year and many shows have opted for longer runs than last time, some even for the full month of the Fringe, such is the quality and professionalism of the venue which, coupled with the warmth of welcome and almost-family atmosphere that Annie and Artistic Director J D Henshaw create, means that performers return again and again. Indeed I recognised quite a few names among the acts from when I was last here two years ago, many with new shows, as well as names and faces new to Sweet Venues, new even to performing at the Fringe itself. So that proves I’m not the only one with a Sweet Venues Loyalty Card (which should so be a thing).

At 3 pm the crowd, consisting of performers with shows at Sweet Venues, a few press and invited guests, start to mass in front of the small outdoor stage, especially arranged for this event. The music starts up, jugs of red and orange cocktails appear, the canapés are passed round and it starts to feel like a party with the odd drop of rain thrown in for good measure. Annie Marrs took to the stage to open proceedings and introduced the first of the two acts today who, between them managed to showcase the diversity (in its true sense) of entertainment that the Fringe, and especially Sweet Venues, provides.

Peter Antoniou is a long standing member of the Sweet Venues “family” and one of the performers who returns year on year. He is billed as a “psychic comedian” for his show Happy Medium and he intersperses quick witted ad-lib comedy with psychic demonstrations. For this launch, he did some mind-reading. No, honestly, he really did, taking two people out of the audience (who were known to others and not plants) and divining first a 4 digit number and then a person’s name all while carrying on ad-lib chat both with them and with the audience. I must admit I was very impressed at his acute perception of facial, subvocal and body language and, with his uncanny ability to cold-read a person, I was not surprised to find out that he is also a trained hypnotherapist. There is no trick to his act, no illusion, just finely honed skill and talent. I’d recommend his show from that one viewing alone. 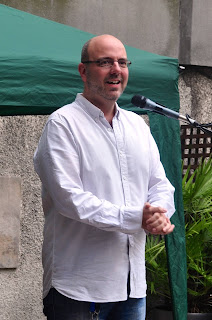 Peter then handed the mic over to Artistic Director and general backbone of all that is Sweet Venues, J D Henshaw, to give the official welcoming speech. And what a motivational speech it was – supportive and personal, challenging and inclusive, saying exactly what the performers needed to hear at that point just before a month’s worth of shows. He talked about the challenges faced by both him and all the performers of picking the right shows, the right people and the right teams to make the Sweet Venues experience work. He put an emphasis on being grateful to those who supported, whether in times of “star-reaching” (a phrase I really liked) or in times of panic when it’s not certain that things are going right. He talked about Sweet Venues and the Fringe itself being not an end goal but a chance to hone and perfect shows, to meet people and improve careers – he said it was “a month of opportunities” - and then went on to list some of the places the shows at Sweet Venues had come from this year. It sounded very impressive with people travelling from Australia and Japan, Maui and... Brighton ("they have to have their whoop moment" apparently), among many others. There’s just as much variety in the styles of shows on too, from Children’s shows and comedy to improv and drama and what is fast becoming a signature style for Sweet Venues Edinburgh Fringe, the darker shows with plays based around Edgar Allan Poe and Nosferatu being mentioned among others. With the crowd now feeling really up and motivated (yes even me... well, nearly) JD rounded off by encouraging everyone to “defy the norm” and declared Edfringe 2016 underway with a cry of “Let’s do this!”

After what would have been a standing ovation had we not all been standing anyway I wondered how on earth the final act for the launch event was going to follow that. I needn’t have worried as Annie introduced Tomás Ford, who arrived amid the pizzazz of confetti cannon and proceeded to sing YMCA like you have never heard it before – it was superb! What a fantastic voice to go with a deliciously overthetop persona as he sang and pranced (yes pranced, that’s the only word I can use to describe it) his way around the audience, picking on some to become the focus of his attention for a verse or a chorus and ensuring everyone did the necessary arm waving at the right times. With everyone already hyped from JD’s speech though, they were ready to party. It was a perfect way to end the formal launch event and I’m sure the party will go on long into the night.

So I think I can fairly safely say that the Fringe at Sweet Venues has started. I’m looking forward to seeing an eclectic month of shows that do “defy the norm” – humour, drama, music and dance – the first of which will be Vivaldi for Breakfast on Saturday morning. Thank you, Annie and JD, for inviting me back for 2016 Sweet Venues Fringe – it’s good to be home.

Find out more about what's on at Sweet Venues and book tickets here.