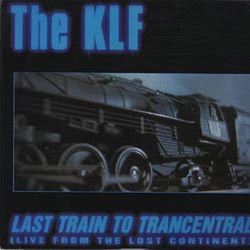 Song of the Day Saturday Throwback is some music from back in the day to kick off your weekend in style. Today Susan Omand catches the Last Train to Trancentral...

The KLF were not your common or garden popstars. Jimmy Cauty (ex-founder of Zodiac Mindwarp) and Bill Drummond (ex of "supergroup with a difference" Big in Japan - the difference being the members of the band all became famous after they left) burst onto the scene in 1987 as the hip-hop heavy Justified Ancients of Mu Mu before they morphed into The JAMS and then The KLF,  giving an anarchic punk edge to the acid house craze of the time. They even hit the top of the charts as The Timelords with Doctorin' the TARDIS... yes that Doctor Who/Sweet mash-up was them too.

As The KLF, they were famous for being, well, The KLF. They espoused Discordianism, Chaos and were the epitome of anti-establishment.  They released albums and singles, sure, and hit the charts a good few times, including the famous Tammy Wynette song about an ice-cream van, but they also released a book called "The Manual: How to Have a Number One the Easy Way," produced a soundtrack for a non-existent road movie and caused chaos by throwing money into festival crowds and dead sheep into backstage parties.

At the absolute height of their fame and notoriety in February 1992, they appeared on the Brit Awards, having won the award for best group (shared bizarrely with Simply Red), with hardcore punk band Extreme Noise Terror as a backing band for a Death Metal version of 3AM Eternal, they fired machine gun blanks into the audience and left the stage mid song to the tannoy announcement "Ladies & Gentlemen, The KLF have now left the music business" and that was it. Done. True to their word, they deleted the whole KLF back catalogue in May of that year. The majority of their music remains unavailable with only The White Room album being produced anywhere in the world.

But they weren't quite finished. As the K-Foundation, these were the guys who burned one million pounds on a beach on the west coast of Scotland - which was pretty much all the money they had earned as The KLF. Just because, y'know, they did.

By the way, Trancentral was a real place. It was the name The KLF gave to their headquarters... a squat in Stockwell, London and the residence of Jimmy Cauty, who, incidentally, later went on to form the genre defining ambient house band, The Orb.