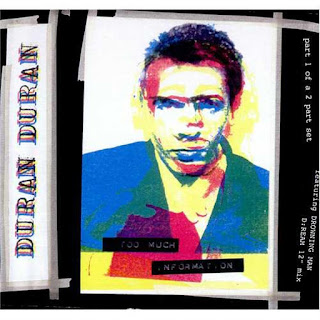 Song of the Day Saturday Throwback is some music from back in the day to kick off your weekend in style. Today Steve Taylor-Bryant gives us Too Much Information...

It's not very often a guilty pleasure song and real world politics collide and with the state of the world at the moment, the rise of the far right, unelected leaders and, most importantly, a media mogul with far too much of a reach into the echelons of power, Duran Duran is probably not your 'go to' choice for political songwriting. I get that, I really do. Maybe some Billy Bragg or Anti Pasti might seem more apt. I need something uplifting though. I need something that tells me how powerful the mass media are and how gullible its electorate, I need something with layers of keyboards that sound like a brass section at times like this.

Too Much Information is a cracking tune released in 1993 and is from the album most fans call The Wedding Album. Whilst primarily about the commercialisation of the music industry and rise to power of the television networks, somewhat ironic considering without MTV the band might not have been as popular, the lyrics fit our present time 23 years after its debut. We are controlled by faceless suits, we do believe everything our television tells us, we are in a mess due to corporations getting involved with political parties, and yes I firmly believe that the next war will have either a condom or cola manufacturers sponsorship label. We embraced these people and led to their dominance of our lives. We can either go out whimpering or we can dance.

Here comes the news with love from me to you