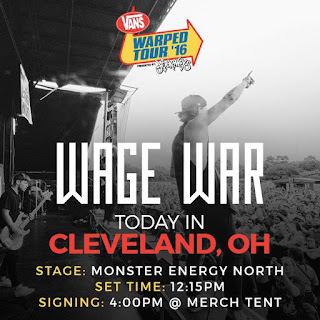 David Ames made a day of it at Vans Warped Tour last week. One of the bands he watched was Wage War...

Wage War was the band that I was most excited about seeing at Warped this year. I had heard a song of theirs come across my Pandora as I was writing one night and I immediately bought their debut album, Blueprints, which is amazing. You should go buy it right now [using the handy link at the bottom of the page - Ed].

The day was hot and they were playing on a stage in the middle of a parking lot at high noon. There were no clouds and about ten minutes into the wait, I was drenched in sweat.

When the intro music began, the small smattering of about fifty people surged forward to enjoy the brutality that was about to take place. Wage War is a metalcore band from Florida whose album is heavy and brutal and grooves so hard. There is a great mix of screaming and singing and the passion they produce album-wise is impressive. Accentuated by great lyrics, the band encompasses everything I want in a metal group. If you are a fan of bands like As I Lay Dying, August Burns Red, or I, the Breather, then Wage War is for you.

The came onstage and began the show with the short but brutal and fitting opening track “Hollow” which also opens their album. A nice heavy, slow paced song that builds until the singer, Briton Bond throws his hands to the sky and the music stops just long enough for the crowd to explode. They emanate so much energy into the performance that the heat disappears and all that remains is the jumping and moshing and energy of the music. From “Hollow,” they move to the infinitely catchy “Awake,” letting the speed of the music fuel a small circle pit. The crowd screams along with chorus creating a cacophony of surprisingly positive words:

“They said we’d never make it out alive but I broke the mold and I survived. Hate is a cancer. We are the problem; love is the answer.”

Next they move into the eponymous “Blue Prints” keeping the energy high and moving. Guitarist/Singer Cody Quistad belts out his lines perfectly in key while he matches notes with second guitarist Seth Blake and bassist Chris Gaylord, creating a soundscape that is punctuated by the powerful and gut-punching rhythm laid down by Stephen Kluesener. The kick drum honestly caused palpitations and I loved every minute of it.

After “Blueprints” the music becomes the angriest it has been all show, pouring into “Basic Hate,” a song that as far as I can tell is a middle finger aimed at groups like the Westboro Baptist Church. Bond growls out “Here is to your false ideals. I am so sick of all your protesting signs. Your claims disgust me. If you really knew the God you claim to serve, you should know that there's no hate in love.” The song ends as it should: with a brutal breakdown that causes the crowd to explode again. When I look around at this point, the crowd has more than tripled and everyone is feeling the power coming from the stage.

The next song, while still heavy, is a little more somber in note, and is introduced by Bond as a song dedicated to all those who have ever contemplated suicide. “Youngblood” is still heavy but the vibe of the song is much different than the others and we all experience a moment of reflection while jumping to the music. After this song, Bond thanks everyone for coming out, tells us to come and visit the band at their merch tent, and then tells the crowd that he wants to see us detonate as this is their last song.

They begin their single, “Twenty One” and the entire crowd sets it off, going insane with jumping, moshing, and crowd surfing. I am the tallest one by about six inches in my immediate area so I am helping people get up onto the crowd and keeping them up. After an amazing chorus, the crowd singing the lyrics of a young man who feels lost in life: “Underneath it all we’re all the same: Never knowing where to go, lost in our way. Can we ever escape? Can we decide our fate?” the song goes into a breakdown which causes anyone standing still to be moved in every direction humanly possible.

By the end of the song, the crowd performs a wall of death and screams as loud as possible to the last, distorted chords of the guitars. The band thanks everyone and makes their way off stage to the shouts and cheers coming from all of us. Wage War was the perfect show to start the day and honestly, they were the best live band I saw all Warped Tour, which is saying a lot considering the legacy bands like New Found Glory, Yellowcard, and Four Year Strong who also played this year. If you ever get a chance to see Wage War live, do yourself a favour: go, get in the pit, and become a part something amazing.