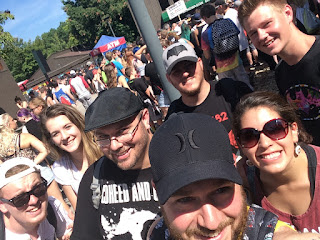 David Ames packs his emergency toilet roll and heads for a day of music with mates as the Vans Warped Tour rolled into town...

As is tradition for myself and a few of my close friends, for the seventh year in a row, I have attended the Vans Warped Tour. This year we returned to the Blossom Music Center in Cuyahoga Falls, OH, the venue that has become our go-to for this annual festival. I loaded up my backpack with as much bottled water, granola bars, fruit snacks, and sunscreen as I could carry (I call it my Warped Tour Survival Kit, which also includes a roll of toilet paper) and made the two-hour drive to the center. As is also tradition for the trip, we stopped into Bob Evans for some pre-show grub. I got the usual Country Fried Steak and the only other person who has been with me since the start, Utrup, gets his annual Pot Roast Hash. The rest of the group consisted of David’s wonderful and lighthearted girlfriend Korinne, his two brothers Nathan and Jason, my cousin (this was his first real concert) Carter, and his friend Sarah. After a filling breakfast, we piled into our respective vehicles and headed upstate.

If you aren’t aware of the setup for Warped Tour, it is as follows. There are seven different stages. Before the tour begins, the creator of Warped, Kevin Lyman, announces the name and sponsor of each stage followed by the bands who will be playing that particular stage over the course of the tour. One wonderful thing about Warped is that the lineup is different every day. They randomize the schedule each morning so that every band has the chance to play at different times of the day.

The lines were surprisingly short when we arrived and, surprisingly enough, Kevin Lyman was outside directing people to move into shorter lines so we could get into the park faster. After a quick patdown and bag search, we made our way into the park weighed down only by our gear and the desire to watch as many bands as possible. I have always been a fan of the heavier bands at Warped where as a majority of my travel companions lean more towards the pop punk acts so we purchased schedules for the day, found a corner and organized. Five minutes later with phones fully charged and schedules synched to meet up later, I began my lengthy, sweat-filled 2016 Warped Tour.

This year I was lucky enough to see the following bands:

I will be reviewing all of the bands in bold above but let me just clarify that almost every band I saw this year was amazing. Every show presented something interesting and, as is one of the greatest aspects of Warped, every band seemed genuinely happy to be performing and enjoying the crowd. What is unlike almost any other festival is that Warped offers a subsection of people who feel like they don’t belong anywhere and it gives them a place to enjoy similar company and experience the music we all love without the negativity which can come from more mainstream festivals like Bunbury, Bonnaroo, or Coachella.

Utrup, who teaches English in Peru most of the year, comes home every year and one of the reasons is so that we can experience this festival together time and again. I have been attending Warped for years and because I continuously have these experiences, I will always go back.