In his new play, theatre director, Anthony Neilson, opens the doors to the rehearsal room and allows the audience to experience the pain and obsession of creating a masterpiece. VentSpleen walked through those doors and watched Unreachable at the Royal Court Theatre...

A film director on a quest to capture the perfect light.

Anthony Neilson knows what makes good theatre. But Neilson is also someone who relishes the excitement of doing it differently, shaking things up a bit and risking all to possibly produce something really quite special. Weeks before opening night it became evident that Unreachable wasn't going to be just another play and that Neilson was attempting something that was going to cement his reputation as a theatrical maverick, Unreachable was going to be a triumph or it would crash and burn with such explosive force that it threatened to take the reputations of its cast with it. Matt Smith chatted recently about his concerns that if he involved himself with the project it could end up being "career suicide". If it had amounted to a disaster, what a way to go! Unreachable is an unpredictable and riotous, roller coaster ride of theatrical genius that lifts the plays basic premise to dizzying heights. It could have gone so wrong but Neilson, as any master of his art, knows what he is doing and he delivers a theatrical diamond of such exquisite beauty that even I run out of sound biting, metaphoric imagery.


The decision to allow audiences behind the wizard's curtain and view the rehearsal process was a dangerous one. With the clock ticking down till opening night and a cast that were to develop the entire play around its concept, it's something that would have caused many seasoned actors to run for the hills. To do more than learn lines and take stage directions means that you become more than players, you actually become the play as you fashion and sculpture what will be seen. As Neilson released teasingly brilliant video footage shot of the creative process, I got the impression that the cast were developing an ensemble piece of such creativity that it was either going to shine like a beacon in the West End or sink under the weight of its own self importance. If Neilson had cast Unreachable badly then the productions title would have served as its own epitaph with reviewers riffing the rather obvious punnage ad nausium. But Neilson cast Unreachable with a steady hand and from the very outset the full house at The Royal Court Theatre knew they were in for a night of theatre they would never forget. 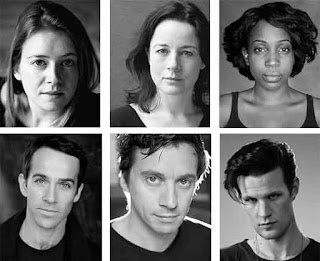 Maxim (Matt Smith) is a Director who is trying to birth a film project that has taken him ten years to develop. Obsessive in his search for perfection and childish both in his singular vision and his treatment of others. Maxim silently manipulates his fellow cast and crew but to what end? What is this light he is so desperate to capture? Smith is expertly cast in a role and he is clearly loving every moment on stage. As a Doctor Who fan I have been a long admirer of Smith's expertise in delivering powerful performance and his eloquence and sheer acting prowess have never been more evident. Neilson doesn't allow Smith's presence to dominate centre stage and Unreachable is very much an ensemble production.

Maxim is supported by his long suffering but fiercely loyal Producer, Anastasia, who is keeping the films investment topped up as well as easing Maxim's frustrations. Amanda Drew is outstanding and perfectly demonstrates the thankless task that is a Producers role. Drew portrays Ana as a driven and talented career woman but who also struggles to hold together the warring factions in her life. Speak to any Film Director and you will understand just how central the role of Director Of Photography is, they are charged with delivering the films visual imagery. Karl is a talented DOP and loyal friend to Maxim but he is riddled with self doubt and desperate for validation. Richard Pyros is astounding in his portrayal of a man who is attempting to grow a back bone but is more driven in his pursuit of cinematic perfection. When he isn't debating with Maxim or duelling with Ivan his habit of forcing out poorly chosen and badly delivered fortune cookie like truisms amuses and befuddles both audience and Maxim in equal measure. Ivan (The Brute) is the very distillation of all that is diva-ish and wrong with the film industry. Think Lord Flashheart on some sort of hybrid, mutant drug and then add several shots of caffeine and you have an idea of what Jonjo O'Neill unleashes on the audience. Literally bursting onto the stage he spews forth a tirade of epic proportions aimed at the film industry in general and Maxim in particular. Ivan is impossible to work with and whose attachment to a project is the acting equivalent of tipping a lorry load of sand into an engine. It falls to Investor Liaison, Eva, to attempt to keep filming on track and she also uncovers Ivan's softer side. Eva is a brilliant and talented business lady and hasn't let being deaf hold her back. In fact, she seems to enjoy others awkwardness around her or perhaps it's more that she has grown used to it. Genevieve Barr is sublime and witnessing her taming of The Brute was marked as one of the stand out moments in a play that had little to detract from it. Every character has a flaw or flaws and Natasha is no exception. As brilliant as avoiding personal connection as she is at portraying the very emotions she seems to avoid at all cost, at least when the camera isn't rolling. Tamara Lawrance's portrayal of a young actress,who is not so much interested in finding herself but more losing herself in her work, is assured and as amusing as it is heart wrenching. Unreachable boasts an ensemble cast who are individually strong but when placed together are the definition of what an ensemble cast should be. 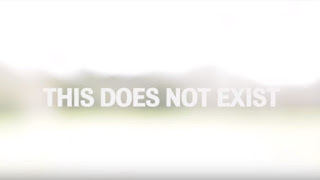 Theatre burns its way into my soul when all of its parts work in a beautiful synergy. Whether you marvel at the sheer stripped back staging or the empathic performance from the cast, this... this is pure theatrical gold. The staging for Unreachable is stripped back, just bare undressed stage with a few screens and boxes are used as props. This is, after all, a film set and the magic happens in front of the camera. The characters and their ability to share their joint and individual journeys are what Neilson forces the audience to focus on, so head turning special effects would only serve to provide a distraction from the real genius. Unreachable was developed in the rehearsal studio by the cast and they own every word and every gesture. Theatre is never about perfection it is about evolution and a production continues to develop and be refined, even and especially after, opening night. Unreachable is a work of imperfect perfection in that it dares to be different and it is invigorating in its refusal to conform to what has always been. From its very concept to its actualisation, Neilson has attempted to convey the belief that Theatre should refuse to be boxed and confined, that it should always challenge and break new ground. Theatre is not a tame beast and it shouldn't always be a comfortable experience, this is a statement that should ring true for both actor and audience alike. Whilst many reviewers will make much of the imagery surrounding the light Maxim so desperately seeks, they, I am sure, will wax lyrical and at length about the underlying metaphor of, whatever the play was about.

For me, Unreachable is about the burden of creating brilliance, its stands as the ultimate nod of respect for all those who painfully and obsessively struggle in their struggle to birth something meaningful and relevant. Whether on the stage or on film, there are motivated individuals who work tirelessly to perfect their art and to bring together an ensemble cast that, for just one moment, make the unreachable, reachable.

Unreachable is being performed at The Royal Court: Jerwood Theatre until Saturday 6th August and you can buy tickets here.