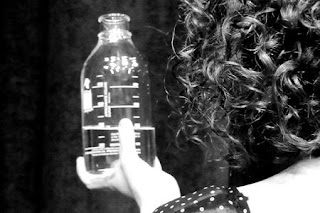 Susan Omand was impressed when she went to see  No Belles at Sweet Venues...

"566 people have won a Nobel Prize in the sciences. Only 15 of them were women"
That's how the show No Belles by the Portal Theatre Company starts. The format of the show is a simple one. Three elegant self assured women on a bare stage, accompanied by the most beautiful ukulele playing, use song, poetry and spoken word to tell the stories of other elegant self assured women who shaped the scientific world as we know it, whether or not they got recognition for their work at the time. The first and most obvious candidate under the spotlight is Mme Marie Curie. She was Radioactive is a wonderful, rhythmic, almost rap like poem that told of Curie's drive and determination in her work and how she is the only person ever to win a Nobel Prize in 2 different sciences before her death due to radioactive poisoning.

It was not just winners that were highlighted either. We heard about the life and work of Rosalind Franklin who never won the prize, but should have for her contribution to the discovery of DNAs double helix. "If only" she had known there was a race on between universities, "if only" she'd had a competent associate who didn't share her work behind her back, "if only" she hadn't died so young. As it was, when her notes were checked after her death it was found that she was only 2 steps away from making the breakthrough that it took Watson and Crick many years to achieve. She received no credit from them when they picked up their Nobel Prize; indeed she was criticised, belittled and slandered.

We also heard about zoologist Rachel Carson, who testified against the chemical companies and highlighted the harmful effects of pesticides in her book Silent Spring and about Rita Levi Montalcini who battled the odds, adversities of war and the whims of Mussolini to continue working on nerve growth right up to her death in 2012, aged 103.

Several other women's stories were covered too in the hour long show, all presented differently by the 3 women on stage but all with one over-riding similarity - the passion and belief of all concerned, both of the heroes of the stories and the presenters as they told them, was genuinely moving. Subject matter aside, because it is an area that interests me greatly and I would watch a show on that subject in any case, I believe that if The Portal Theatre Company performed the phone book they could make it entertaining and engaging. They were highly personable and friendly off stage as well, taking time to interact with the audience both before and after the show, taking an interest in their stories too. On stage their performance was impeccable, genuine and heart-warming.

I know it's early in the month but this is my show of the Fringe this year and anything else will have to be great to beat it.