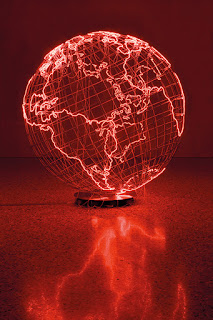 Tony Cross experiences the effectiveness of art at the Mona Hatoum Exhibition, now on at the Tate Modern...

Here’s a thing: I think this Mona Hatoum exhibition is the first time I’ve seen an art exhibition where I can’t say I ‘liked’ anything but which – on occasion – had a genuinely made me feel uncomfortable. I have had that experience with films before. For example, ‘Nil by Mouth’ is an astonishingly brilliant film but was such a tough watch that I’ve no inclination to rush to see it again. I felt a bit like that after visiting this exhibition.

Mona Hatoum is a Lebanese born Palestinian artist who moved to London in 1975, studied at the Slade between 1979 and 1981. She started off doing performance art, which obviously isn’t overly represented here. What is represented are her installations, which I found mostly interesting but also – on occasion – baffling. She moved into making installations, which were minimalist.

The question about what is art is one that greater minds than mine have tried to answer. It seems to me that the sarcastic answer to that question is art is what people who make, buy, sell and display art tell us it is but there’s also the possibility that art is anything that holds up a mirror to who we are as human beings. It is that which makes us think about who we are. The problem, of course, is the more distorted the mirror or the more abstract the art the harder it is to see what an artist is trying to say and if you can’t work that out surely the art is worthless?

Sorry about that. This exhibition had that kind of effect on me. I’m not sure how I would have felt if I’d ‘liked’ everything.

If this exhibition taught me anything it is that Mona Hatoum is making the art of discombobulation. For example, Homebound (2000) is a set of ordinary objects set out behind a wires connected to an audible electrical current that lights up a lamp. Set out like that I can hear you crying about what sort of nonsense this is but it is genuinely creepy. The sound of the electrical current calls to you as you approach the room and something instinctive tells you that this is not a safe noise. Then once you’ve left the room that sound follows you for a while, like an audio shadow and you don’t feel entirely comfortable. 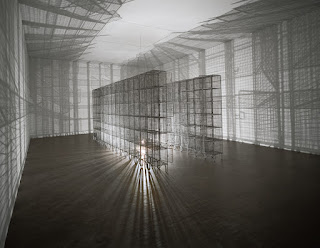 Then there’s Light Sentence (above), which again sounds like nothing: a room with a set of small cages and a light bulb hanging in the middle of them. The light bulb moves and throws angular shadows against the wall. Initially I thought of the Callan title sequence (here) but actually, as I stood in that room, I began to think about prisons and being locked up and it began to feel very uncomfortable.

Another impressive and thoughtful work is ‘Impenetrable’, which makes you think about the barriers humans put up against each other. Then there’s ‘Twelve Windows’ (2012 – 2013) that displays traditional Palestinian embroidery pegged on steel cables hanging between two walls. It too makes you think about the barriers we put up to our fellow humans.

The absence of human beings from these works makes them feel even more alienating. Hotspot (top) is a large globe with the continents marked by looks like a hot, bright red neon light. It makes it feel like the whole world is a danger. It seemed to be an living illustration of a piece of Warsan Shire’s poetry that I came across recently (and that had a huge impact on me):

later that night
i held an atlas in my lap
ran my fingers across the whole world
and whispered
where does it hurt?

(from Warsan Shire’s ‘What They Did Yesterday Afternoon’)

The final room contains Undercurrent (2008), which feels like a living, breathing alien thing. A series of wires and lightbulbs. The lights fading and brightening as if the thing is alive. I was reminded – being a Doctor Who fan – of the Carsinome from The Web Planet, although less organic. And if that isn’t a niche reference then I don’t know what is.

So by the end of the exhibition I felt like I’d seen something worthwhile, something that had an impact on me at a surprisingly deep level but that I couldn’t explain why. I’m not sure I liked any of it but it made me think: about barriers, about how we treat each other, about fear and strangeness.

Go along yourselves. Take a look. You might come back to me and call me a fool and it is perfectly possibly that I am. But take a look.