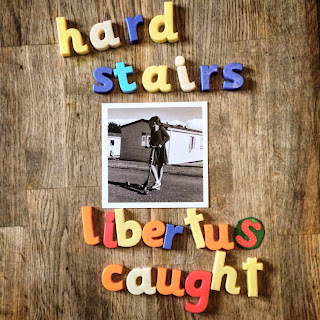 Horston Longsail and Martin Julier, vocals/guitar and drums (respectively), make a lot of noise for two people. I suspect the posh types in Cheltenham, where they are based, are appalled by this.

Fortunately, producer Chris Townsend records this noise for other less-appalled people to hear. And thank goodness he did. This is the sort of debut album that makes you prick up your ears, tap your feet and end up singing along to each song by the end. It's one of those albums where you can hear the band shout and laugh during a number, you sort of expect an audience to clap at the end of each performance and there's an 'as live' quality that makes it feel fresh and raw.

So, Libertus Caught is such a mix of styles throughout the original songs that it's hard to pin down influences. There's something of The Doors about one, Peter Green's Fleetwood Mac can be heard in another, then there's The Rolling Stones, Eddie Cochran, Led Zeppelin, early Status Quo, Freddie King, ZZ Top, Manfred Mann, Black Crowes, a little Chuck Berry and even a sort of Rocky Horror Show vibe. And yet, it's none of those. It's so brilliantly Hard Stairs that you can find something in each listen.

There's blues that are down and dirty and then there's Hard Stairs. As mentioned above, for a duo they can make a wall of sound large enough that Roger Waters might complain about putting another brick in it. Horston's voice is something gargled in gravel and then drowned in Southern Comfort. How his vocal chords still work is beyond me. He abuses them with such frequency that you genuinely wonder how he talks after a gig. I'm guessing with one of those Stephen Hawkins machines, so he can rest his tired larynx. His guitar playing is sublime, with such a spontaneous originality that you can imagine him pulling all the right distorted faces when he hits a riff or dives into a solo showered with feedback.

As for Martin Julier, the first track (and first single off the album) – 'City' – makes his drums sound a little rasping, which makes you wonder if he can provide something a little heavier to match the chunky guitar-work. But, from the second track onwards, he gives some fantastic backbone to the songs. There's no over-reliance on flashy drum solos or constant repetition. His staccato fills and syncopated off-beats, as well as hitting a cymbal only when necessary to embellish a line or a chord, makes him a clear partner in the gruesome twosome's avalanche of rock. It's like Charlie Watts, of The Rolling Stones, was suddenly possessed by Keith Moon, of The Who, and there was a constant battle to gain control of the drumkit.

I bought the special Audio Tape USB version, which looks like a reeled audio tape of old, appealing to my nostalgic tendencies, and also bringing such a cherished musical relic into the digital age. It does seem a very appropriate 'gimmick', as this is the sort of album that you can imagine being a recorded bootleg on such a tape and then sold at gigs.

For me, their second album can't be released fast enough.

As hard-working and energetic as they are on the live circuit, and it's worth catching them in a venue if you can, there's also an extra dimension to their truly stunning debut that marks Hard Stairs out as a down 'n' dirty blues force to be reckoned with.


Buy the digital album from Bandcamp  or the snazzy Audio Tape USB version from audiobooksontape.com