Review - Fiddler on the Roof 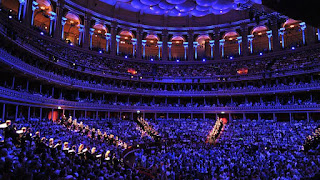 With the 2016 BBC Proms concerts due to start tonight, Tony Cross looks back at a Proms visit from last year and Fiddler on the Roof...

This was absolutely fabulous.

The location was The Royal Albert Hall for Prom 11, Fiddler on the Roof. Starring Bryn Terfel as Tevye, the milkman and his family. They're part of a tight-knit Jewish community in the village of Anatevka. It's Tsarist Russia so probably not one of the better times and places to be Jewish - although there aren't many of them in general to be honest.

Tevye is married to Golde (Janet Fullerlove). He has many daughters all of whom will need to be found suitable husbands. This means involving Yente (Rebecca Wheatley), the matchmaker.

Obviously none of this can be simple. Yente lines up Lazar, the butcher (Cameron Blakeley) for Tzeitel (Charlotte Harwood) but she's already in love with the tailor, Motel (Anthony Flaum). There's supposed to be a wedding. And there is. Tzeitel persuades her father to let him marry Motel. The first break in 'tradition'.

It means it is harder for Tevye to turn down Hodel (Katie Hall) when she chooses to marry Perchik (Jordan Simon Pollard). Perchik is a visitor to Anatevka from Kiev. He's a student and a radical. Symbolic of a lot of young, educated Russian Jews of the time, many of whom would help bring about the Russian Revolutions (and beyond). They don't even get married before Perchik returns to Kiev to carry on his 'work'. Another tradition bites the dust.

But even Tevye can't accept the choice of Chava (Molly Lynch). She wants to marry Fyedka (Craig Fletcher). Fyedka is Christian. Tevye chooses this as step too far and claims Chava is dead to him. Even as tradition becomes eroded - and I can't imagine that Fyedke's family would have been happy with his decision either at the time - there is a line Tevye can't - or won't - cross.

Unfortunately even as we try and live our lives in peace and quiet history has a habit of stomping all over our happiness with its jackboots and uniforms.

First Tezitel and Motel's wedding ends with a bunch of Russian thugs, led by a Constable (Mark Heenehan) whose heart doesn't seem to be in it but can't bring himself to disobey orders, smash up the place, including the newly weds presents. It is the beginning of the end for the Jews of Anatevka.

Next they are told they must sell up and leave within three days.

They are all to go to different places. To New York, to Chicago, to Warsaw or Krakow. The flight of the Russian Jews has begun. Some of those places will be safe, but some of them will be the graveyards of their children and grandchildren. The Jews of Warsaw and of Krakow will experience a new, more industrial form of antisemitism.

That is a much more serious note than I intended to strike but you can't watch this musical without the ghosts of the Holocaust haunting you. Or, as they sing 'Anatevka', and pack up their belongings to make the long march to wherever you can't not think about the fate of refugees in the modern world.

So it's not exactly the most light-hearted of musicals, although it can be quite funny at points.

Whenever I see a musical with my Musicals Tutor, Dr Carrie Dunn, there's always a point where we talk about which songs I know from a musical I've never seen. I was astonished, as an example, to realise I knew lots of the songs from The Sound of Music. They'd got into my brain without ever having seen it. I knew two songs from Fiddler on The Roof, 'Matchmaker' and 'If I Were A Rich Man' (obviously) so this was all pretty fresh to me.

I have to say I liked pretty much every song. 'If I Were A Rich Man' is brilliant (and Bryn Terfel performs it magnificently.) I liked 'Miracle of Miracles' but loved 'Sunrise , Sunset' and 'Now I Have Everything.' Perhaps I'm just a old romantic.

The performances were really good too. I'm a bit of a Bryn Terfel fanboy and he's great here. His voice is majestic and you always get the impression that he could blow people off stage if he let rip with the full works. I've never seen Terfel in an opera, which is something I should try and remedy as soon as possible, but I've enjoyed both this and Sweeney Todd. His acting is also pretty good here. He's obviously not the best actor in the world but who needs to be in opera. However he's got that voice, charisma in buckets and the ability to deliver a funny line when needed. I'd watch him in anything I think.

The rest of the cast are pretty damn fine to but I'm going to be invidious and flag up Charlotte Harwood's Tzietel and Anthony Flaum's Motol; Jordan Simon Pollard's Perchik and Katie Hall's Hodel.

Basically I'd happily go and see this again and it rivals Guys and Dolls and Sweeney Todd for top spot in my favourite musicals list.