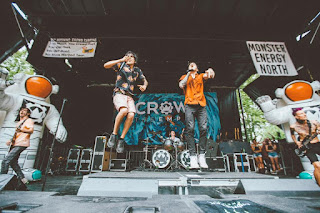 David Ames made a day of it at Vans Warped Tour last week. One of the bands he watched was Crown the Empire...

Crown the Empire was a band that I discovered by accident at Warped four years ago. I had never heard them or heard of them but their label was doing a buy one, get one free sale and their album cover looked amazing so I picked up their debut, The Fallout. On the four hour ride home from Indianapolis, I popped in the CD and was blown away by what I heard. It was heavy, it was passionate, the harmonies were incredible, the hooks were spectacular, and lastly, it was so thematic. I fell in love. If you are curious about similar sounds, Crown the Empire is similar in some ways to I, the Breather, Asking Alexandria, Chiodos, We Came as Romans and Memphis May Fire.

The following year, Utrup and I were able to catch them live at Warped and they did not disappoint. Their show was full of energy and excitement and, although the crowd was infinitely lame, the band was great. Fast forward to the following year and a new album, The Resistance: Rise of the Runaways, which fell somewhat flat for me. The band tried to continue their thematic concept through their second release and, while there were some bright spots on the album, overall it wasn’t as great as their first. They didn’t come to Warped in 2015 and I was pretty disappointed but luckily, on the eve of Warped Tour 2016, Crown the Empire announced a new album and a spot on the Monster North stage. Their first two singles, “Hologram” and “Zero” were right up my alley and I couldn’t have been more excited to see them live again.

The dual vocals of Andy Leo Rockhold and David Escamilla are incredible and for a band that moves and jumps around as much as Crown the Empire, their harmonies still sound amazing. Both have so much energy that they embody what it means to be a front man. Backing this up was the fittingly heavy and energetic guitar work of Brandon Hoover and the great low end work of bassist Hayden Tee who both do a wonderful job providing a canvas for the vocalists and working the crowd. To round out the band, let me say first how impressed I was with the work of drummer Brent Taddie who provides the spine for the band and adds another dimension to the live performance, consistently throwing out drumsticks and generally rocking out.

When they hit the stage this year, surrounded on both sides by large, inflatable spacemen, the crowd exploded and scene girl and metal head united in jumping to the full-force throat punch of their opening song, “Zero.” This song is a great show opener, heavy but melodic, with lyrics that make you want to move: “We stand on the edge wondering, if I take one step will I live, will I sink? We’re dying for more every day, so count down from ten and jump when I say zero.”

From the new, they bridged into their very first single, “The Fallout” which is what drew me to them in the first place. The energy increased, the crowd moved, circle pits opened, and for a moment, all of us watching were one with the band on stage. Next they moved onto the newest single, “Hologram” which, although I had heard and enjoyed before, was a completely different animal in a live setting. Next they proceeded to play another classic, the heavy “Voices” which brought the crowd back from the slightly more mainstream “Hologram” and squarely into the realm of post-hardcore/scene metal that made Crown the Empire popular in the first place.

Keeping the classic vibe alive, the band went into “Makeshift Chemistry” causing the crowd to erupt again and for myself to become a part of an ever-growing circle pit at the center of the crowd. The song is all about unrequited love and the idea of being ignored by the person you care for the most. The crowd had to stop for a moment halfway through the song to ensure the safety of a fallen crowd surfer but the band handled the situation with poise as well as professionalism and general good nature before building back up to the breakdown, the entire crowd singing, “All I wanted was to be your love but now you’ve left and I cannot fill the void. All I wanted was to be your love but now I’m finally moving on” and then, with a wry smile to the crowd, Escamilla screams “I don’t give a fuck” before the breakdown.

I was exhausted after “Makeshift Chemistry” but there was one song left, the single from their second album. “Machines” went off like most of their music does. There was jumping, singing, screaming, and an all-out raucous time was had by all.

In the end, despite some naysayers from the crowd of “real” metal who say that this band is simply part of a scene that is terrible, I ask you to give their show an honest chance. Sit back and enjoy the way they not only sound like the album but perform with such gusto that you can’t help but enjoy yourself. If the music isn’t enough, the creepy/maniacal/dare I say borderline sexy smiles of Andy Leo will do just as well. This band enjoys the live show more than most I have seen and despite the fact that it was 95 fucking degrees and we were in the middle of a blacktop parking lot with no shade in sight, they played their hearts out to the crowd and we gave them everything we could in return.