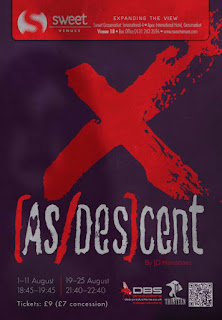 The story centres around Ben Phillips, played by Iain Martin, who has lost his partner Helen (Pippa Reid) in an accident and has retreated to a mental hospital, blaming himself and believing he is a danger to society, as others close to him start to die. However, his psychiatrist at the hospital, Dr Strickland (Paul J Creegan) thinks this is just survivor's guilt and sets out to reconnect Ben with the world again but finds he is not just dealing with Ben himself.

For the most part this play is a double header between Ben and Dr Strickland, exploring the Doctor/patient dynamic in a troubling and unsettling case. The first meeting between the two is a complete monologue from Dr Strickland but, even though Ben doesn't actually speak at this time, the distance and distraction in his mannersims convey a lot more about his character than words ever could. As the play develops, the interaction between them grows and we learn more about the initial accident, the aftermath and Ben's reactions to it. His speech about the rabbit in the hospital grounds is very telling of his emotional state. More importantly we see the growth of the psychiatrist as a character as he tries to deal with his patient's effects on his own thoughts. The recordings of each session come into their own too and have a very significant role in the progress of the storyline as we hear the voices of the two men joined by a third, female voice as the tape is played back. The ghost, because Helen is a ghost, becomes more and more evident as the play moves on and, with it, her obsessive need to keep Ben for herself and not let him move on and form new bonds. Separate incidents become linked by this realisation until the final and inevitable conclusion is reached.

Because this is a fringe production, the only set is a table and two chairs in a black curtained space but this is all that is needed, allowing the audience to focus entirely on the characters and the dialogue. The minimal set and the small performance space really add to the truly unnerving atmosphere of this production and there are a couple of properly scary, make-you-jump, moments. The actors were really believable as the characters they played. The ability of Iain Martin as Ben Phillips is particularly note-worthy as there is so much to his disturbed patient's character that has to be put across without words. That said the writing was superb with an engaging plot that didn't shy away from giving the story the futile ending that is so often lacking in dramatic work these days. Even without the actual appearance of the ghost, this production would make a remarkable study of the dark side of the mind but, with the additional spiritual presence and the satisfaction of watching the build up to an ending that you know is going to happen, this is one of the best ghost stories I have seen for a long time.