Opinion - Folk Metal: A Sword and a Song 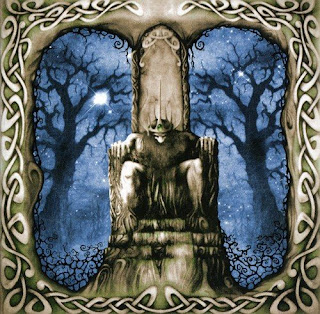 Our resident Pisky Lord, Romeo Kennedy, saddles up his dragon and packs his biscuits for a world tour of Folk Metal...

There are so many sub-genres within heavy metal and though I love and adore most of them. There is one sub-genre that fuels my writing and I am a bit of a fan of.

Now, I use Folk Metal as a blanket term to encapsulate other styles within that genre i.e Viking Metal, and Battle Metal, Pagan Metal, Celtic Metal all come under the term Folk Metal in terms of overall styling in genre terms.

It started for me when I was at college and doing a degree in Music. I was to do a thesis on folk music, to which I focused my efforts on traditional folk music in Cornwall. When telling a friend of the work that I undertaken, he gave me a CD of the Finnish band Finntroll, and said, “You might like this” and he was certainly right. Black metal infused, glorious riffs, wonderful folk instrumentation and beautifully growled Swedish vocals by Jan “Katla” Jämsen. Ticks all the boxes. I was quite blown away when listening to their 2001 album Jaktens Tid, a fabulous album and it still is very much a favourite album of mine.

Over the years there was a natural progression in discovering this sub-genre of music and the vast majority of it was Scandinavian, be it Bathory’s album Hammerheart (cited as the first Viking Metal album) or Finnish band Moonsorrow’s 2001 debut album Suden Uni (Wolf’s Dream.)

However, Folk Metal is not exclusive to Scandinavia and the Vikings.

There are so many wonderful bands from all over the world that make wonderful heavy metal music that has been infused with folk metal, and folk stories of their own culture. I love the Scandinavian folk metal stuff, and the songs about the epic Viking sagas, by bands like Týr (Faroe Islands), Skálmöld (Iceland), Månegarm (Sweden), Einherjer (Norway), Turisas (Finland), Svartsot (Denmark) and so many others, but I certainly like to look all over the world for new and exciting folk metal outside of the Viking shape of things.

And there are some fantastic ones. Think of me and this piece as a brochure to the delights of folk metal around the world.

It started for me with the discovery of Swiss band Eluveitie, (Who I shall go on record as saying are quite possibly one of my favourite bands ever. That's right, ever ... Next to Rush.) After hearing Eluveitie’s album Helvetios, with its melodic and growled vocals in both Gaulish and English, crushing riffs, soaring choruses, and folk instruments such as the hurdy gurdy, I was beyond hooked and quite nearly dropped everything to go on epic quests through mysterious forests with a sword strapped to my back, in the end I ventured off to the shops to buy a packet of biscuits, which I later laid waste to, with a rambunctious cheer as I held high my mug of tea. Just take a listen to Luxtos from the album mentioned.

From Eluveitie I did a sort of a world tour with my ears with seeking out and discovering folk metal from around the world, without ever having to leave the house. Splendid. 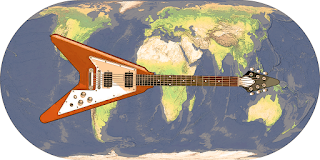 There was Heidevolk from Holland whose song Vulgaris Magistralis cannot help but make you smile, while at the same time make you want to stomp around like a giant, and how could you not feel like that with lyrics such as, “I am Vulgaris Magistralis and I ride on a mammoth, and on Sundays a mastodon.”

Then from Holland to Germany and bands like Equilibrium and Finsterfrost are a great addition to any folk metal playlist. Equilibrium especially have some amazing instrumental tracks like Mana but many of their songs are darkly growled by vocalist Helge Stang And the thrashing riffs by guitarists Andreas Völkl and René Berthiaume mixed with folk instruments such as the accordion and pan flute create a sort of dissonance but it works so well. And just take a listen to the track LaufDer Welt by Finsterforst, a true folk metal delight.

From Germany we travel to Hungary and the band Dalriada, whose melodic and beautifully composed tracks like Amit ad az ég from the album Álda, and Hungarian really is a melodic language, just listen to that chorus. Magic.

From Hungary we take a trip to Mother Russia and the band Arkona, another favourite of mine on the playlist and the track Yarilo from the album Goi, Rode, Goi wonderful folk melodies with fantastic vocals both clean and growled.

Grab your ear as we hop over the border into Estonia and listen to Metsatöll who mix traditional Estonian folk instruments (torupill, kannel) with neck snapping metal in tracks like Külmking and Küü.

A quick hop onto a jet of riffs will take us to Beijing, China where the genesis of Tengger Calvalry, whose style of Mongolian folk metal or (Nomadic Metal) began. Traditional Mongolian throat singing by Nature Ganganbaigal, who also plays the Morin Khuur (also known as the horsehead fiddle) Tengger Cavalry gallop into the folk metal scene with riffs aplenty in tracks like War Horse and Hymn of The Wolf. Tengger Cavalry are, If I’m not mistaken, the first internationally known Mongolian Folk Metal band.

From China we travel to the middle east, and to Israel the country of origin for Orphaned Land who mix traditional Arabic folk music with head-banging riffs and lovely choruses, with lyrics inspired to bring people of all faiths together, amazing songs like Sapari, and Olat Ha’tamid.

From the middle east we travel to South America and to Brazil, the home of the Tierramystica who blend Andean melodies with rousing choruses with memorable hooks like in the track Vision of The Condor.

From there our last destination is Northern Ireland and the home of the Celtic Metal band Waylander. A real essence of traditional Irish folk songs lie at the heart and soul in this band but also pure heavy metal like in the track As The Deities Clash.

This is only a taste of the delights of Folk Metal. There are bands from all over the world whose folk metal anthems are not exclusive to their own country for example Skiltron from Argentina whose songs are based in the mythos of folklore of Scotland complete with bagpipes. And in Finland there is the fantastic band Whispered whose music is deeply rooted in the samurai legends of Japan complete with traditional instruments. A truly fantastic band.

Now go forth with a song and sword.