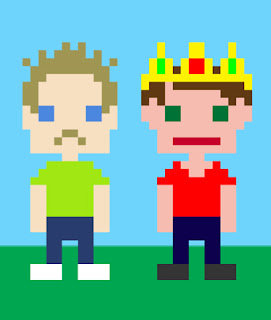 Forget Robot Wars and Pokemon Go and go to the Edinburgh Fringe this August to take part in WiFi Wars...

Featuring in a new BBC Radio 4 documentary about video gaming, While My Guitar Gently Bleeps, and with a TV adaptation of their original live show, Go 8- Bit, to be hosted by Dara O’Briain and air on UKTV’s entertainment channel Dave this autumn, comedian and regular videogames commentator, Steve McNeil, and his tech wizard side-kick and coding king, Rob Sedgebeer, have announced a limited Edinburgh Festival Fringe run of four dates at the Pleasance Dome of their exciting new live and interactive show, WiFi Wars.

WiFi Wars is a live comedy game show where the audiences play along. By logging in to the WiFi Wars network with your smartphone or tablet (making sure you have plenty of battery first!) audiences are able to compete in a range of games, quizzes and challenges to win the show, and prizes.

The technology used in WiFi Wars was originally created by the boys for the live incarnation of Go 8-Bit, and will feature in the new TV adaptation of the show too. WiFi Wars was first performed as part of the Royal Institution’s 2015 Summer Programme after Steve and Rob’s appearance on their 2014 BBC Christmas Lectures. Since then the technology has been developed to create a show full of interactive fun, button bashing, hilarious trash-talking and competitive frenzy. From a version of one of the earliest arcade games, Pong, right on up to the latest virtual reality technology, this is a show for nerds and norms alike.

Creators and hosts of WiFi Wars, Rob Sedgebeer and Steve McNeil, said: "We’ve had so much fun developing our tech at our Royal Institution residency in London, and for the TV show recordings of Go 8 Bit, we can’t wait to take our toys to a wider audience. Frankly, we can’t believe driving round the country to play computer games is our job and we’re enjoying every minute of it! "

Steve is no stranger to the gaming world, having presented Challenge TV ’s Videogame Nation , Ginx TV ’s Console Yourself and Minecraft: Digging Deeper . He will also be starring in Dave’s Go 8 - Bit as a team captain this autumn.

Steve and Rob have also hosted their own stage at Eurogamer’s EGX , welcoming over 80,000 people to the event over its four day run at Earls’ Court. Whether you’re a joystick veteran, Angry Birds addict or a complete noob, this retro gaming experience is an inclusive, highly addictive group activity, proving that anyone can be a gamer. A unique night out, full of fun, excitement and comedy, that is not to be missed - so book your tickets now and “let’s do a gaming”!