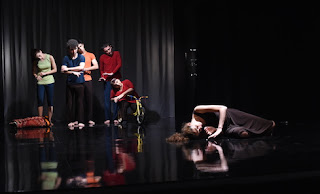 A showcase of exceptional new work from disabled artists will be presented at Tramway, Glasgow, this September...

From cutting edge performing and visual arts, the programme invites you to join the artists to explore and discover. Share reflections on life at 80 and the personal stories of the homeless; discover ceramic telephones from the 1880s; watch live absurd reinterpretations of YouTube self-help videos; and witness a chance encounter as a hundred year old mechanical monster emerges from the waves. Plus much more in a festival for everyone to enjoy, be challenged by and participate in. 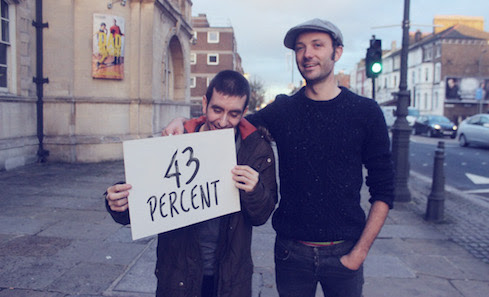 The opening days of the festival include the world premiere of 43 percent, a dynamic new multi-media work by Gary Gardiner and Ian Johnston that explores the medical and social definitions of being human, and the Scottish premiere of The Way You Look (at me) Tonight from Tramway Associate Artist Claire Cunningham and Jess Curtis, which combines movement, music and text to ask important questions about how we perceive each other.


The opening weekend continues with RSC and television actor Tim Barlow reflecting on life at 80 in a new collaborative work, HIM, from theatre maker Sheila Hill and photographer / videographer Hugo Glendenning.

The world premiere of an international co-creation between Natalia Mallo and Gisele Calazans from Brazil and Glasgow-based Marc Brew, MayBe, looks at how chance encounters can act as catalysts of possibility, including the possibilities of love and intimacy.

Activist, actor and comedian Liz Carr explores a complex and controversial subject with the back drop of musical theatre in her new show Assisted Suicide, The Musical.

In Grandad and the Machine, Jack Dean presents a story that begins when a hundred year old mechanical monster makes an unexpected appearance, and only, possibly, Grandad can stop the chaos that follows.

Hiraeth is presented by Armenia's first integrated dance company bringing together disabled and non-disabled performers,NCA Small Theatre, who have collaborated to tell a story of the painful yet remarkable journey of the Armenian people throughout their history.

The second weekend of the festival brings the contemporary dance company of disabled and non-disabled performers Candoco to Glasgow with a double bill, Counteracts, featuring commissions from two of the most exciting artistic talents working in the UK today, Hetain Patel’s Lets Talk About Dis and Beheld by Alexander Whitley.

Drawing on her experience as a person with albinism, Jo Bannonunpicks a tangle of stories: the stories we tell of ourselves and the stories told about us in Alba.

A daily programme of events, conversations, actions and responses to Tramway’s Unlimited Festival, entitled What?, seeks to make shift happen by provoking and evolving discussions around disability and art. Full details will be announced over the summer.

Running throughout Tramway’s Unlimited Festival is a series of exhibitions surprises, delights and questions.

Ceramic slip cast telephones – ranging from ‘candlestick’ telephones of the 1880s to flip-top mobile phones from the 1990s - created by Cameron Morgan with Project Ability for the festival will be shown in a work titled Put your sweet lips closer to the phone.

Interventions will be presented away from Tramway in city centre locations.

In Demonstrating the World, Aaron Williamson enacts everyday tasks with detailed step-by-step instructions in the style of YouTube ‘how to’ videos, questioning the intuitive negotiation of even the most habitual activity.

Inspired by her experience of life on the street, Bekki Perriman’s sound installation The Doorways Project features a series of recorded monologues telling of the intimate, sometimes humorous, often disturbing and most ignored experiences of homeless people.

There will also be a Family Day on Sunday 25 September, bringing Tramway’s Unlimited Festival to a close.

Tramway’s Unlimited Festival is produced by Tramway and Glasgow Life and supported by Creative Scotland. The festival is a distinct part of the ongoing work throughout the UK and internationally of Unlimited - an arts commissioning programme delivered by Shape Arts and Artsadmin which offers talented disabled artists funds and mentoring support to develop, produce and show ambitious work.

Works presented at Tramway’s Unlimited Festival include commissions from the Unlimited programme.

Find out more at www.tramway.org/TUF