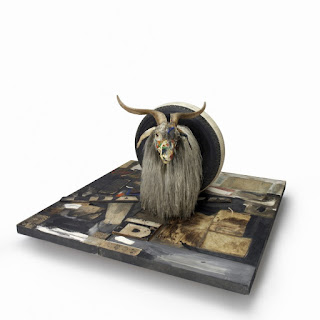 Robert Rauschenberg’s iconic work Monogram (1955-59) is to travel to the UK for the first time in over half a century as part of Tate Modern’s upcoming retrospective of the artist...

Monogram is a classic example of one of the artist’s famous Combines. These works were hybrids between a painting and a sculpture which Rauschenberg developed in the 1950s and which were arguably his greatest achievement. Made when the artist was barely in his 30s, they marked a clear break with an older generation of abstract expressionist painters such as Barnett Newman and Mark Rothko, who hitherto had critically dominated US art. Assembled from materials including a stuffed angora goat, a rubber tyre, a tennis ball and a shoe heel, the work demonstrates Rauschenberg’s bold challenge to the hierarchical distinction between traditional art materials and everyday objects.

The stuffed goat that forms part of the work was bought by Rauschenberg for fifteen dollars from a used furniture store. Like many of the Combines the work evolved over a number years, and was originally fixed to a vertical canvas before being placed on a horizontal one. The rubber tyre was then added so that, in Rauschenberg’s words, the two ‘lived happily ever after’ on the canvas. The title of the work is taken from the union of the goat and tyre, which reminded the artist of the interweaving letters in a monogram.

Rauschenberg’s Monogram is very fragile and rarely travels. It will be generously lent by the Moderna Museet, Stockholm, where the goat has recently undergone conservation treatment including an x-ray examination in preparation for its journey. It has not been shown in London since 1964. Following its presentation at Tate Modern, the exhibition will travel to The Museum of Modern Art in New York and the San Francisco Museum of Modern Art in 2017.

Monogram will take centre-stage in a room dedicated to Rauschenberg’s Combines all of which are significant international loans. Bed 1955, will travel from The Museum of Modern Art, New York. This seminal work was assembled from what was allegedly Rauschenberg’s own pillow and a quilt given as a gift by fellow artist, Dorothea Rockburne, stretched like a canvas and covered with abstract pencil drawings and paint.

Achim Borchardt-Hume, Director of Exhibitions, Tate Modern said: “Rauschenberg saw the experience of art as inseparable from the experience of life and so made work from all sorts of materials – textiles, cardboard boxes, car parts, radios and even stuffed animals. Rauschenberg exploded the myth of the artist working isolated in the studio and revelled in making connections between the stuff of the world and the materials and strategies traditionally associated with ‘high art.’ He blazed a new trail for art in the second half of the 20th century and became a beacon for other artists for generations to come.”