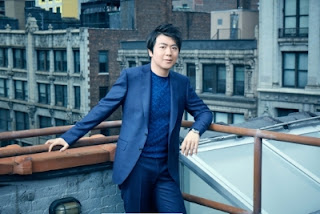 The Big Apple is the big inspiration for classical pianist Lang Lang's new album, out in September...

From the haunting reveries of Gershwin and Copland to the in-the-moment intensity of songs made famous by Jay-Z and Alicia Keys, Lou Reed and Don Henley, New York Rhapsody rediscovers the dazzle and the soul of America's most symbolic city.

"I made this album because I wanted to pay homage to the city that I love," says Lang Lang. "This city has changed the course of music more than any other in the last hundred years. It has inspired and enriched me beyond words and has become my home away from home."

For New York Rhapsody, Lang Lang joined forces with Grammy-winning producer Larry Klein to create an album that embraces the musical spirit of New York in ways both surprising and traditional. Inspired by E.B. White's celebrated essay Here Is New York, Klein assembled musical ideas and energies that both reflect New York's past and evoke its dynamic present.

The centerpiece of the album is a performance of Gershwin's Rhapsody in Blue featuring Lang Lang and multiple Grammy-winning jazz legend, Herbie Hancock in a two-piano version conducted by John Axelrod with the London Symphony Orchestra.

In one of the album's boldest choices, co-arrangers Klein and Grammy-winner Billy Childs marry the Leonard Bernstein/Stephen Sondheim song Somewhere from West Side Story with Lou Reed's Dirty Blvd from his classic album New York. Lisa Fischer's vocal in the yearning Somewhere is a powerful contrast to actor Jeffrey Wright's interpretation of Lou Reed's indelible words in Dirty Blvd.

Next, Lang Lang is joined by violinist Lindsey Stirling on a spinning version of Danny Elfman's theme for Spider-Man; and then by trumpeter Sean Jones on the West Side Story classic Tonight by Leonard Bernstein.

Bookending New York Rhapsody are perhaps surprising choices – quiet, contemplative pieces by New York'sgreatest musical poet, Aaron Copland. To open, Lang Lang and Klein chose The Story of Our Town, from Copland's 1940 Our Town film score, to evoke the dozens of small "towns" within the big city. To close, one of Copland's last works, the rarely heard In Evening Air, reminds us says Klein, "there are always pockets of peace and quiet beauty" in New York.