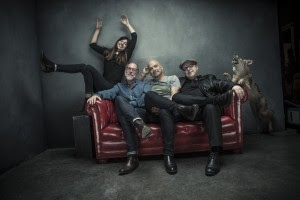 The band – Black Francis, Joey Santiago, and David Lovering – also officially welcome bassist Paz Lenchantin to their permanent line-up. Lenchantin has been the band’s touring bassist since January 2014 and played an integral part in the recording of Head Carrier when, as well as playing bass, she can also be heard singing lead on the track “All I Think About Now”.

A special limited edition deluxe box set of Head Carrier will be available exclusively through their own website, and includes the CD, the album on heavy-weight/180 grams black vinyl, and a 24-page, oversized booklet with the song’s lyrics and Vaughan Oliver’s artwork, although it will need some saving up for at £82. Also available only through the band’s website is a special bundle that includes the deluxe box set, special t-shirt, and a special 12” x 12” record sleeve sized poster. Don’t worry though, cheaper options are also available.

Pixies have also announced the first leg of their world tour with a European run that begins November 15th in Vienna. Tickets for those concerts go on sale Friday July 8th and UK dates will be announced soon, although with next week’s concert at the O2 Academy a sell-out you’ll need to be quick off the mark.

You can listen to Um Chagga Lagga, the first single off the album now: