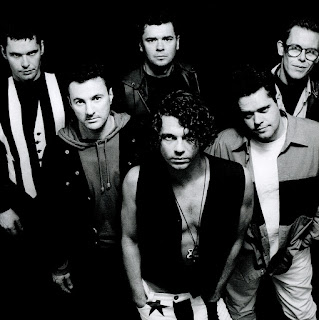 Song of the Day (SotD) is our choice of a single or album track that we think you need to hear. However, instead of the new music featured through the week, Saturday Throwback is a track from back in the day to kick off your weekend in style. This week Steve Taylor-Bryant remembers INXS...


Hate baby hate
When there's nothing left for you
You're only human
What can you do?
It'll soon be over
Don't let your pain take over you

You couldn't avoid INXS over here in the UK during the late 1980's and early 90's. The band were everywhere, topping the charts, filling the stadiums on tour, and the charismatic frontman, Michael Hutchence, who had made the celebrity gossip rags due to his relationship with Kylie Minogue was back on the front pages again during a steamy and often fraught coming together with TV presenter and 'IT' girl Paula Yates (can anyone explain what an IT girl is? In fact don't bother, I'm sure I don't really care) who was still married to our national treasure Bob Geldof at the time. Hutchence more than the band was constantly in the press and it's easy to look back now and see that that all the celebrity nonsense tainted the band during that period, not their legacy that's in the records and memories of anyone who attended an INXS gig, but with the press saturated in Hutchence/Yates greasy tales of debauchery it was hard to remember that INXS was a quality band.

They were musically inventive, very tight live, full of energy and enthusiasm for their craft, and Hutchence (when not off his head on celebrity) was a true rock showman. He exuded cool and sexuality, he moved like no one else on stage at the time, and boy could he sing. It's taken the 19 years since his passing for me to regain my love of INXS, a chance to listen to the songs for music's sake not because of some tabloid story, and they are timeless. An INXS tune released now would fit as well as it did 25 or 30 years ago, and that is testament to the song writing, the musical structure, and the obvious love of creating that flows through the songs.

For these SotD Throwback articles I am tasked usually with picking the one song. It's right there in the intro. I can’t though, not with INXS. Instead have a top 5 from The Very Best album (the 20 song version not the 42 song version with all the live performances) and a reminder, if you need one, to go watch Dogs in Space.