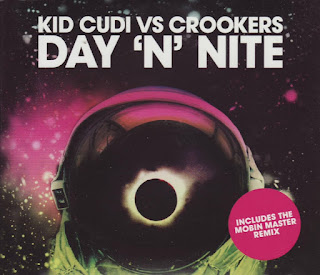 AlbieMedia's Song of the Day (SotD) is our choice of a single or album track that we think you need to hear. In a week of selections from his rap collection, Nate McKenzie continues Day N Nite with Kid Cudi...

Actor, musician, and fellow Ohioan (#Believeland), Kid Cudi has been gathering a following for close to a decade now. Kanye West signed him in 2008 on the heels of the success of his mixtape A Kid Named Cudi.

Cudi is best known for "Pursuit of Happiness" (Man On The Moon, 2009) but, ironically, the most popular version of that song is the dance remix by Steve Aoki that was featured on the Project X soundtrack. Cudi is also one half of the rock duo WZRD. Today's Song of the Day, Day 'N' Nite, can probably be considered more club music than rap.

It is safe to say that Kid Cudi is cross-genre relevant, not to mention broadly talented.

Day 'N' Nite was the first single off of Man On The Moon. Even though it received a decent amount of mainstream attention and radio play, it seems that people have forgotten how good the song is. It mixes elements of R&B, Hip-Hop, and Rap with introspective insight that is a staple of Cudi's music.

Cudi drives the lyrics with self-reference while a coaxing beat lulls the listener into a feeling of empathy and reflection. You'll be bobbing your head, not just in rhythm, but also in knowing exactly what he is feeling.

Put Day 'N' Nite on replay in the dark and you'll find out something new about yourself.