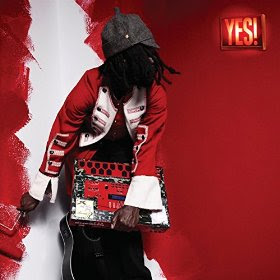 AlbieMedia's Song of the Day (SotD) is our choice of a single or album track that we think you need to hear. In a week of selections from his rap collection, Nate McKenzie wishes he knew Natalie Portman...

With an adopted pseudonym that is an acronym for 'Knowledge of Self' you can expect Canadian rapper k-os to convey an intricate intellect with his music. His new album, Can't Fly Without Gravity, is eclectic as it flows from waxing poetic over jazz on Snapback straight into harder hitting rap with Wild4TheNight and then proceeds to showcase an old school bent on the ensemble piece, Boyz II Men.

What hooked me though was a song that spoke directly to mid-20's me: I Wish I Knew Natalie Portman.

If I disregard the fact that I've been a hardcore fan of Portman since Mars Attacks! the fact that I Wish I Knew samples California by Phantom Planet would have made it an instant favourite in my mind anyway.

But here is where k-os gets interesting to me. Whether intentional or not, k-os weaves a complex story-behind-the-story with I Wish I Knew that, to me, is akin to something JJ Abrams would write.

It breaks down like an episode of Pop-Up Video on VH1:

The song could probably be subtitled Cal-forlorn-ya. (I'm sorry)

There is really no significance to this, but I find it extremely intriguing. It also serves to bolster my affinity for I Wish I Knew Natalie Portman, as well as the rest of k-os' music. This sort of intricacy is severely lacking in modern mainstream rap and hip-hop.