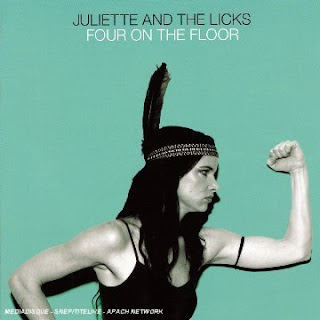 DJ Stevie is in da house, all hip and cool like the young folk, and takes us back a decade for today's Song of the Day...

You can't knock it or rock it or be-bop it, it's a itch you can't scratch
Nothing's gonna stop it, I'm a cheater, so ravenous
Waitin' on my man and his one hot kiss, I'm on the prowl
Sent my thunder hour after hour, break this spell I'm under

Film stars turn pop stars? This isn't always a great idea, very rarely works, although is normally slightly more successful than pop star turned actor, and I can't think of many stars that I would listen to for enjoyment rather than curiosity. Juliette Lewis is one I will. I have nothing but admiration for Juliette as an actor, Natural Born Killers and Kalifornia are regularly watched in my free time, but a few years ago I stumbled across her band. I'll admit curiosity played an part initially but once I'd listened to the back catalogue I was a firm fan. Female led rock/punk with a massive attitude? Yes please! Sign me up.

My favourite of all the releases is 2006's Four on the Floor which should have stolen a Sum41 title as it's all killer no filler. It's musically moshable, you can't help but move even when you're 40 and dance like you're at a never ending wedding. It's like the best live show you've ever been to but recorded flawlessly, with Juliette Lewis ranting and spitting lyrics like punk never ended. Amongst the gems on the album is Killer which has a relentless pace from the off, Purgatory Blues which is such a pleasing listen, and Sticky Honey which is just a batshit crazy couple of minutes for your earholes. However one tune stands out from the rest and that's Hot Kiss.