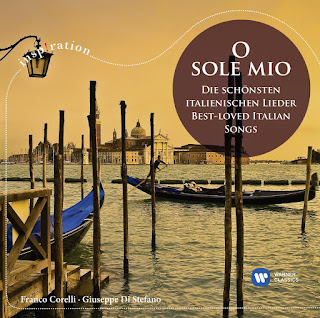 "But I don't listen to/know/like any classical music." If you've ever watched adverts on the TV, then yes you do as this week's Song of the Day, Ad Break proves. Today Susan Omand grabs an ice-cream...

Ah... Italy. The architecture, the music, the football, the ice-cream. What better tune to use for advertising one of the must-have summer essential of the late 70’s and early 80’s than one from a well known Italian folk song, in a style known as Neapolitan (yes really, it means from Naples and has nothing to do with ice-cream flavours) written in 1898 by the one hit wonder that was Eduardo di Capua in Odessa, Italy. Neapolitan songs were songs written for an annual songwriting contest for the Festival of Piedigrotta, which began in 1830, in Naples and, setting his music to the poem by Giovanni Capurro, Di Capua drew his inspiration while touring Crimea with his father (a violinist street musician). Di Capua and Capurro sold the rights of the song to the Bideri publishing house for 25 lire (about £1,500 allowing for inflation). Little did they realise how popular the song and all its many derivatives was going to become or they might have held out for more money.

The tune has been used with different lyrics on several occasions, most famously becoming It’s Now or Never sung by Elvis Presley, and the original Italian song has become one of the staples of popular tenors the world over – Mario Lanza, Enrico Caruso and Luciano Pavarotti among them. But it was the advert for ice-cream set, ironically, in Venice (i.e. nowhere near Naples) that brought the tune back to the public psyche and, if you play it to any crowd of people of a certain age I will almost guarantee the version of words that they'll sing along to it.