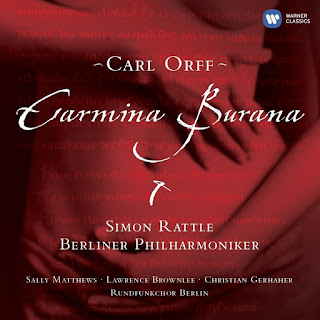 "But I don't listen to/know/like any classical music." If you've ever watched adverts on the TV, then yes you do as this week's Song of the Day, Ad Break proves. Today Susan Omand looks at O Fortuna ...

O Fortuna, the music used in the X Factor (and, showing my age, the Old Spice advert) is not actually as old as you think it is as far as classical music goes although the words for it, yes there are words in the full version, come from a 13th century poetry collection called Carmina Burana. The whole poetry collection was set to music as a cantata in 1935/36 by German composer Carl Orff but it is only really O Fortuna that is popular, having now featured not only in adverts but also in films as diverse as Excalibur, Last of the Mohicans and Cheaper by the Dozen. And, to be honest, I can understand why the rest is generally ignored by popular culture as it is nowhere near as imposing.

The structure of the whole composition on 25 (yes, sorry, 25) movements is cyclical, following an emotional journey through as the Fortuna Wheel turns and the feelings turn from joy to sadness, hope to grief, with the O Fortuna music being the first and last piece as the circle closes in upon itself. Even though it’s a fully orchestrated work, the melodies are simple with little in the way of complex harmony and multi-layering.

Orff’s Carmina Burana was originally intended to be a staged piece with full on choreography and visual design but is now more often played just as an orchestral piece. I won’t subject you to the whole thing, but here’s the O Fortuna that everyone knows.