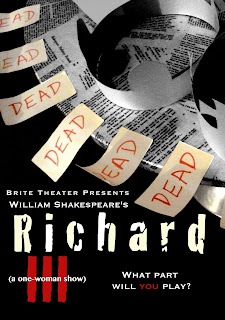 Opening at Sweet Venues Brighton tonight, experience Shakespeare's murdering King like never before and who knows, you may even survive the experience. Here's how VentSpleen fared when he saw Emily Carding's Richard III in London recently...

I didn't survive. In fact I was playing George, Duke of Clarence, so I was the first to fall victim to Richard's blood lust.

Emily Carding is hypnotically mesmerising as Richard in a production that perfectly showcases the sheer breadth of her talent as well as her knowledge of Shakespeare. This is Shakespeare unlike anything I have ever experienced before and is truly a fully immersive experience. This being Pub Theatre, there is no stage and the audience are seated in a circle around a table and swivel chair. Welcomed by Richard himself, we are allocated a character to play and shown where we are to be seated. Right from the outset Carding is entirely believable as Richard and even ad libs expertly in character as she sizes up each individual and allocates a role depending on what she feels suits them. All of this activity, whilst feeling unusual, doesn't really seem out of place and we sit in our seats with mounting anticipation of what is to occur in the next hour. This is down to Carding's considerable stage presence and sheer confidence with her material, being a show that she has performed on over 50 occasions she has honed her performance to a sharpened point.

To undertake an accurate retelling of Richard III in only an hour and with only one (professional) actress would seem to be too much for even the most talented of actresses. Yet, Carding achieves this Herculean task by cleverly drawing on the audience as her supporting cast. Whether an audience member replies in character or stays in stunned silence, Carding is able to move the show forward. Often relying on Richard's own, and perfectly within the play's text, monologue each audience member either assists with the murders before meeting with their own messy ends. The oppressive and intimate atmosphere created by Carding placing her portrayal of Richard within the confines of a tight circle is so effective and entirely gives the play its fluidity. With the use of an office swivelling chair, Richard moves from character to character, provoking violence and whispering words of flattery. With the dispatch of each character marked by the placement of a Post-it note with "Dead" written on it the audience are very much made to feel that the blood spilt does indeed stain their hands as well as Richard's. Never was this illusion of belief more clearly demonstrated than when Richard attempts to incite the murder of the two young Princes. The audience member coerced into this appalling act was clearly horrified and wrestling with their conscience, even uttering that "they would have to live with the actions for the rest of their lives" Richard's response? A grin and a reply of "Oh go on! The money's good..." 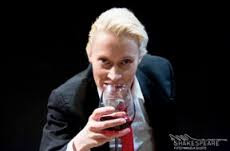 It is Carding's portrayal of Richard as a murderous individual whose lust for power was also his undoing, at the same time playing him as a human being who's actions were extreme but perhaps not entirely monstrous as had been previously implied. Indeed, under the powerful and accusatory stares of the ghosts who were haunting him, one could almost feel a pang of sympathy for him. Richard had not received the security and sense of accomplishment that he had longed for and he realises that his murderous actions had added to his feelings of both emotional and physical inadequacy. Carding has created a wonderfully believable Richard that, complete with hugely effective hump and listless walk, ensures that the audience has not even the slightest hesitation in entering into the gory tableaux that is put before them. Carding has an impressive and lengthy experience with Shakespearean characterisation and the delivery of Richard's lines is both compelling and powerful.

Of particular note is the effective way that modern technology is used without it feeling unnecessary or gimmicky. Richard receives reports of the battle via mobile phone text, which also serves as a way to increase his irritation as the messages are often overlapping. This nicely overcomes the issue of the lack of supporting cast who must deliver a particular piece of information at the relevant time. Carding also expertly deals with sudden thumps or noises without once dropping out of character which, coupled with the occasional ad lib to audience members, accentuates the authenticity of her performance.

As the play draws to an end and Richard falls to the floor, marking his own body with its own Post-it noted death certificate, the audience are left in dumbfounded awe. Carding herself, after taking her well earned applause, is clearly exhausted and this is not a performance that would convince without a 100% level of commitment and passion.

With the challenges of bringing theatre in a relevant way to an audience that is growing ever smaller and less willing to move outside of "what they know", it is hugely exciting to see Shakespeare brought to life in a way that still has the power to entrance. Whilst never taking away from the sheer brilliance of The Bard's writing, Carding's performance serves as a example to all. A statement of intent that, no matter how hard and great the challenge to create and innovate, there are still actors who are talented and bold enough to dream and dare to push the envelope. I leave the venue feeling that what I have experienced hasn't so much broken the fourth wall but smashed it to smithereens.

Richard III will appear at Sweet Venues Brighton (The Dukebox Theatre) from tonight, 9th June until 11th June and you can book tickets here