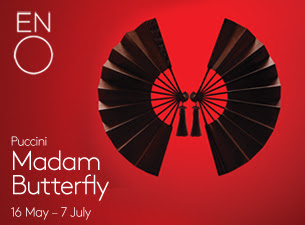 It should be said, before I go into specifics here, that I am reviewing this as an absolute non-expert in opera. If the singing wasn’t reaching the supreme standard, then I wouldn’t know. I can spot a bum note but not a soprano missing out on the upper register. I’m a bog-standard member of the public that likes watching opera. I’m sure there are people out there that can give you the full monty on the singing and singers so if that’s what you want then that’s what you should have.

This is the fourth time I have seen Madam Butterfly so I am pre-disposed to liking it. The fact that the day before this I saw The Taming of Shrew at The Globe led me to believe that my weekend was themed around the breaking of women because Butterfly is broken, more savagely, than Kate.

This ENO production was originally directed by Anthony Mingella (although a few tweaks have been made by Sarah Tipple who directed the revival if my memory serves.) It looks beautiful. The lighting, sets and costumes are magnificent. There’s a moment, towards the end of the first act – a combination of lighting and falling petals – that is genuinely quite wonderful. There’s also the Oogachaka baby. 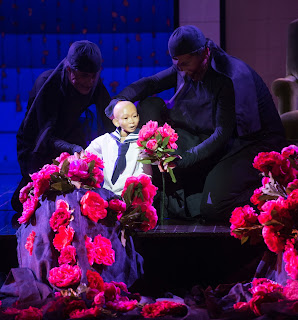 The Oogachaka baby is what the puppet child reminded me of the first time I saw this production back in 2005 but that’s damning some magnificent puppeteering with silliness but I can’t help what it reminds me of. Truth is, after the child’s initial appearance, you forget the puppeteers are there. And it certainly makes for a more easily manipulated cast member than an actual child.

The story of Madam Butterfly is well-known but I’ll dash through it quickly. F.B. Pinkerton (David Butt Philip) is a Lieutenant in the US Navy who has decided to marry a fifteen-year-old Japanese girl. Because he can. He doesn’t seem to love her. He’s just wants to have the pleasure of having her whilst he’s stationed in Japan. Butterfly (Rena Harms) though ‘means it’ as Sharpless (George von Bergen) points out to Pinkerton. Alas Pinkerton chooses to ignore Sharpless. That’s because Pinkerton is a dick.

Let me say a few words about F. B. Pinkerton. He is, even by the standards of any fiction, one of the most vacuous, stupid and thoughtless characters you’ll ever meet. His careless butchering of Butterfly’s feelings is cold. His sudden rush of self-pity and horror at what he’s done towards the end is one of the great cases of too little, too late in fiction. You almost wish that the play ended with Butterfly slicing and dicing Pinkerton with her father’s sword. It’s Pinkerton who deserves an unhappy ending. It’s perfectly possible to read Pinkerton’s behaviour as a metaphor for US Imperialism. The fact that the story is set in Nagasaki is uncanny foresight. The opera could easily end with a blinding flash of light. 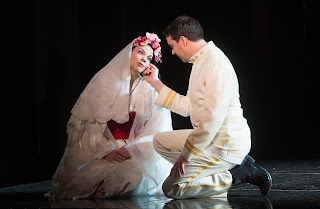 Pinkerton marries Butterfly. However, Butterfly is abandoned by her family for converting to Christianity, then abandoned by Pinkerton who returns to the U.S.A and left on the verge of poverty and starvation. Then we learn that Pinkerton’s ship has returned. Sharpless is sent to do Pinkerton’s dirty work – see Pinkerton is an absolute dick – but Butterfly surprises Sharpless with the child that she had in Pinkerton’s absence. We then discover that Pinkerton has an American wife who is ‘kindly’ happy to adopt the child and leave Butterfly to her humiliation. Butterfly chooses to accept this offer but not the humiliation and chooses to kill herself.

It’s genuinely moving. And horrible. Men, it turns out, are bloody horrible. Pinkerton is peak horrible.

If you’ve never been to an opera, then Madam Butterfly is a good place to start. The music is stunning. The pick of the songs being the long love duet between Butterfly and Pinkerton that ends Act One, ‘One Beautiful Day’ (which is Butterfly’s aria in Act Two), ‘The Flower Duet’ with Suzuki (Stephanie Windsor-Lewis) and Butterfly and Butterfly’s final aria.

There’s a scene in The Shawshank Redemption when Andy’s managed to play a chunk of opera through the prison speakers. Red says, “I have no idea to this day what those two Italian ladies were singing about…I’d like to think they were singing about something so beautiful it can’t be expressed in words, and it makes your heart ache because of it. I tell you those voices soared, higher and farther than anybody in a grey place dares to dream. It was like some beautiful bird flapped into our drab little cage…” Well, unlike Red I know what Butterfly was singing about and it still makes your heart ache and, for a moment, a beautiful bird flapped into my drab little cage.

Madam Butterfly runs until the 7th July at the London Coliseum and you can book tickets here.