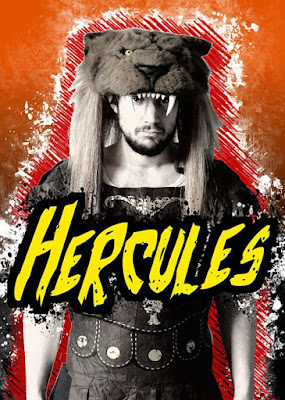 Joshua Crisp is a one man story telling legend in this retelling of the Hercules tale,  as watched by VentSpleen at Brighton Fringe recently...

I've always been a huge fan of Hercules (not the Disney version although James Woods was amazing as the blue flamey haired Hades) and his epic clashing with titans. After my first night at the Fringe I couldn't wait to watch Joshua Crisp retell the stories in his own fantastic style. Watching Joshua at work is exhausting and this review is just not going to do his frenetic storytelling anywhere the justice it deserves. Imagine Jackanory but on a kind of caffeine-induced, sleep-deprived, hugely-over-compensating-to-the-point-that-it-exudes-children-presenter level of excitement but, at the same time, remove any irritation at the impossibly over happy lunacy and you have an idea as to what this hour was like. Crisp has set himself the er, Herculean task of retelling all twelve of Hercules Labours in under an hour and in a humorously engaging way.

Portraying Zeus as a sort of brainless jock sounds risky by it really works within the context of the show and it's no small wonder that Hera is displeased, which is probably an understatement and filled with apoplectic rage more appropriate. Hercules, himself, has always occupied a kind of Johnny Bravo sort of status in my mind, albeit with fractionally larger cranial capability, and the image of him running around undertaking all of the Labours with only 'Plan A' served to amuse me throughout the entire hour. Plan A, in case you're interested, involves using his perpetually full quiver of arrows and letting them fly with Gattling gun like levels of speed. Eurystheus, the legitimate Champion of the Gods is portrayed as a snivelling, weedy man who has a penchant for hiding in large Grecian urns. Not exactly evil but devoid of all of the characteristics that would make him a suitable Champion. Stand out moment for me is a very good impression of Tom Hardy if he were to portray the Giant, Geryon, the owner of the cattle Hercules has to steal to complete the Tenth Labour and is now something I actually want to see happen. 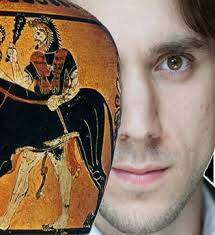 As Crisp points out, the 12 Labours are so insanely unbelievable in their original writing, although I believe they would have loved the writing of Douglas Adams and Terry Pratchett, that it doesn't take much effort to push them to extreme parody. I feel that he is massively underplaying his skill as a story teller and to bring these classic tales to life in 1 hour is a phenomenal achievement. To do so in an engaging and hugely entertaining way that manages to breath a new comedic life into them takes an accomplished master storyteller. Crisp clearly has a deep and passionate love for Hercules and his Labours and this is evident from the very outset. The audience, made up of adults and children, were all equally enthralled by events on stage and this alone should tell you all you need to know about the level of impassioned creativity demonstrated. I have a ten year old son and the only way he sits still for more than a few seconds is if England are playing football or he is glued to his X Box (other consoles are available). So to retain a 12 year olds interest for an hour without utilising either of these distractions is an achievement that should be a Labour all on its own.

I heartily suggest that you take the opportunity to catch Joshua Crisp in this show whenever you see it but, to be honest, Crisp could bring to life a phone book in an entertaining and amusing fashion.

Keep up to date with future productions and dates here