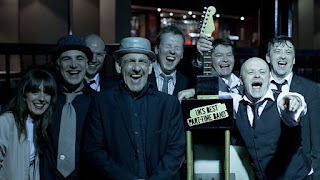 In the Grand Finale of the talent show on BBC Two, comedian Rhod Gilbert announced that the winner of the UK’s Best Part Time Band was Edinburgh-based ska band Bombskare.

Bombskare went head to head with five other bands for the coveted accolade and came out on top. The nine-piece self-proclaimed ‘sorcerers of skank’ are popular on the festival scene and have gigged the length and breadth of the British Isles - regularly appearing in venues across Edinburgh and Glasgow.

The other five bands competing in the final were Johnny Cage & The Voodoogroove (Cardiff), Cadavers (Sheffield), The Caffreys (Newcastle upon Tyne), Dubheart (Bournemouth) and King Salami And The Cumberland 3 (London).

For the final, Rhod Gilbert was reunited with his three judges: Ultravox front-man Midge Ure, former New Order and Joy Division bassist Peter Hook, and legendary Soul II Soul producer Jazzie B. The three music legends previously joined Rhod on his sonic journey across the UK for BBC Four with Midge Ure taking on Scotland, Ireland and Wales, Peter Hook championing the north of England and Jazzie B backing the south of England. At the end of each road trip, five acts were selected for a regional battle of the bands, where they competed for one of the six places in the Grand Final on BBC Two.

Cassian Harrison, Channel Editor of BBC Four, said “What a brilliant climax to a wonderful series – it has been a fantastic celebration of some of the best part-time musicians the UK has to offer. The passion, determination and commitment of everyone who took part was clear to see, and all the finalists should be really proud. Huge thanks to Rhod for bringing the humour, and Midge Ure, Peter Hook and Jazzie B for their musical insight and expertise. And of course, huge congratulations to Bombskare - they were fantastic.”

Midge Ure, who was responsible for putting them through to the final, added “Although all the bands who made appearances on UK’s Best Part time Band are to be applauded for their drive, tenacity and music, the winners Bombskare were outstanding. When trying to define what makes a great band - songs, presence, musicianship - the general consensus was to base the decision on the impact they made emotionally, and Scottish ska band Bombskare consistently gave 110%. Very proud of them and all the other bands out there who do this for the sheer love of it.”

Bombskare’s band leader, Scott, says: “We feel really lucky to have made it as far as we did. I think the fact that we did a good performance on the night really helped. The whole experience of meeting the other bands and being in such great company was fantastic - being with that kind of calibre of band was a privilege. And of course meeting Midge Ure and hearing all the positive things he had to say about us.”

The competition received more than 1,200 applications from bands playing rock to reggae, ska to skiffle, bhangra to blues and everything in between. Leading double lives, the bands were all connected by an incredible passion for music and an escape from the nine to five grind.