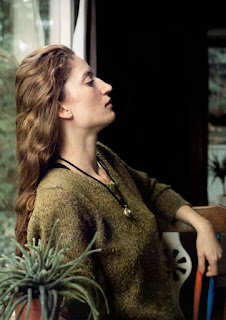 The best contemporary portrait photography from around the world will be celebrated in a stunning exhibition at the Scottish National Portrait Gallery in Edinburgh, opening on Saturday...

The Taylor Wessing Photographic Portrait Prize will bring together 56 astonishing entries from the 2015 competition, which attracted 4,929 submissions from some of the most talented photographers working today.

Established in 1993, this prestigious prize is organised by the National Portrait Gallery in London and has been sponsored by international law firm Taylor Wessing for the last eight years. The £12,000 first prize was awarded this year to David Stewart, for his fascinating group portrait of his daughter and her four friends. Five Girls 2014 mirrors a photograph he took of the young women seven years ago when they were about to start their GCSEs, and which featured in the Taylor Wessing Photographic Portrait Prize 2008 exhibition.

Born in Lancaster, England, Stewart began his career photographing punk bands, including The Clash and The Ramones. After graduating at Blackpool and The Fylde College, Stewart moved to London in 1981 and works on a mix of personal projects and commissions. This year is the sixteenth time Stewart has had a photograph in the exhibition.

Speaking of his winning portrait, David Stewart said: ‘I have always had a fascination with the way people interact – or, in this case, fail to interact, which inspired the photograph of this group of girls. While the girls are physically very close and their style and clothing highlight their membership of the same peer group, there is an element of distance between them.’

Second prize was taken by Anoush Abrar for Hector, his photograph of a friend’s child, inspired by Caravaggio’s painting Sleeping Cupid from 1608. Iranian-born Abrar explained: ‘I found my portrait of Hector so powerful and iconic that it inspired me to continue this project as a series called ‘Cherubs’.’ Abrar studied at the University of Arts in Lausanne, and has taught photography there since 2005. His work was previously selected for the Taylor Wessing Photography Portrait Prize 2013, where he took third prize for his powerful portrait of former UN Secretary-General Kofi Annan.

Third prize has gone to Peter Zelewski’s photograph of a woman he spotted on Oxford Street whilst working on his series Beautiful Strangers, and fourth prize was awarded to Ivor Prickett’s photograph of a displaced Iraqi family who had fled their village near Mosul after Isis took control of the area. The John Kobal New Work Award, worth £5,000, was won by Tereza Červeňová for her portrait of her friend Yngvild.

Among the diverse range of sitters and subjects featured in the show are a number of engaging portraits of well-known figures such as the President of the United States Barack Obama and First Lady Michelle Obama; actor Benedict Cumberbatch; artists Gilbert and George; actor Peter Capaldi; and artist and writer Yayoi Kusama.

Recent work by the award-winning South African photographer Pieter Hugo will also be included within the exhibition as part of the new In Focus display. The In Focus feature is an annual showcase for new work by an internationally renowned photographer, which is exhibited alongside the photographs selected for the competition.

Judged anonymously, the diversity of styles in the exhibition reflects the international mix of entries as well as photographers’ individual and varied approaches to the genre of portraiture. For the first time, photographers were encouraged to submit works as a series in addition to stand-alone portraits. The Taylor Wessing Photographic Portrait Prize is one of the most prestigious photography awards in the world; it is a hugely important platform for portrait photographers and offers an unparalleled opportunity for celebrated professionals, emerging artists and amateurs alike.

Speaking of the exhibition, Anne Lyden, International Photography Curator at the Scottish National Portrait Gallery and competition judge, said: “It is exciting to welcome back the Taylor Wessing Photographic Portrait Prize to Scotland. The diversity of images and issues represented in this year’s competition make for a strong and provocative display; visitors will be able to see some of the best in portraiture today.”

Dr Nicholas Cullinan, Director of the National Portrait Gallery London and competition judge, added: “The strength of the four shortlisted works reflects the outstanding level that photographers across the world are working at today. The exhibition will be especially exciting this year as we will be displaying a number of photographs that were submitted as a series of portraits, as well as new and unseen work by acclaimed photographer Pieter Hugo.”

Tim Eyles, UK Managing Partner at international law firm Taylor Wessing and competition judge, commented: “Yet again the excitement and anticipation of seeing this year's submissions was fulfilled by their striking diversity and fascinating array of styles, settings and subject matter. Although there was much lively debate amongst the judges, it was noteworthy how the final selection had endured powerful analysis but ultimately reflected a commonality of view. The process is intense, emotional and elevating. I felt privileged to be witness to such a myriad of exciting images and talent, and learned much from the inspired approach of my fellow judges.”