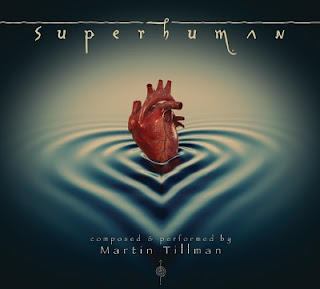 
Tillman (Batman trilogy, Black Hawk Down, The Ring) has always been passionate about EDM and now he has fused this high-energy style with rock 'n' roll grit, symphonic sweep, and the film soundtrack depth and finesse that he is known for. Superhuman is an exciting and uplifting cinematic journey from an accomplished artist who has contributed to over 120 film soundtracks (including upcoming Pirates of the Caribbean: Dead Men Tell No Tales), released a string of solo albums, toured around the world, and collaborated with legends Hans Zimmer,Harry Gregson-Williams, Sting, Elton John, B.B. King, Elvis Costello, and Beck.

Superhuman, which is dedicated to Tillman's wife Eva, is a reaffirmation of the power of the human spirit and a testament of love. It celebrates the courage and drive of those who must summon up the superhuman strength needed to battle against extraordinary challenges every day. Tillman collaborated with several famed musicians on Superhuman including Michael Landau (Michael Jackson, Joni Mitchell), Davey Johnstone (Elton John),Graham Russell (Air Supply), Vinnie Colaiuta (Sting, Frank Zappa), Leeland Sklar (James Taylor, Phil Collins),Dee Lewis Clay (Peter Gabriel, Jamiroquai), David Paich (Toto), and the City of Prague Philharmonic Orchestra.

Superhuman takes flight in all its panoramic glory on 11 diverse tracks that includes the sublime "Zero Gravity" which tranquilly radiates an expansive and blissful ambience. Tillman merges classical Ravel with cutting-edge electronic dance music on the dynamic and relevant "Superhuman". "The Invisible Shield Of Strings And Bows" unspools like a film reel filled with poignantly drawn cello lines. Shining washes of synths and a rapid dance tempo run through the EDM-immersed "Wonder". "Cracked Diamonds" comes on with sleek, James Bond-like sexiness, while "Celluloid Spaces" segues from soulful gospel-blues to joyful EMD euphoria. Tillman even adds a trace of human vocals to an otherwise all-instrumental record, with wordless female croons gracing the gospel-rocker "Unlocking The Locks" and hymn-like sighs hovering over the shadowy "Involuntary Midnight".

Superhuman showcases Tillman as a composer who can blend a multitude of musical genres into an absorbing and transporting album and a performer whose mesmerizing compositions are a means of exploration, connection, and celebration.

Listen to Zero Gravity on Soundcloud below