News - Stop the Train in Edinburgh 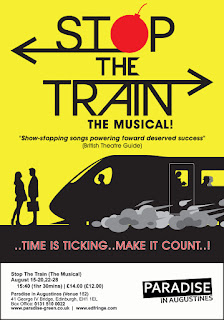 Stop The Train - The Musical is an explosive, brand new show from platinum selling songwriters Rick Guard and Phil Rice coming to Edinburgh Fringe in August....

This feel-good and uplifting dark comedy, wrapped in a twisting love story, sees a carriage of commuters from all walks of life, held hostage by a once-successful man, now with nothing left to lose. He parts his fellow passengers from their beloved mobile phones and makes his one demand…a conversation. This enforced human connection leads to surprising, shocking and hysterical revelations from all, as they embark on a journey together that they will never forget!

The piece was conceived out of personal experience. Rick Guard witnessed a ranting and threatening individual on a London to Brighton train, whilst making his daily commute to his first, last and only ‘proper job’. He was amazed at the lack of reaction from the other commuters; no conversation, no acknowledgement, no response. The passengers simply ignored the fiasco, cowering into their seats. The incident sparked the question…what would it take to make these people come together and interact…what was going on in their individual lives that they were so afraid to communicate…would Rick ever know a personal thing about these people that he shared his mornings with 5 days a week. 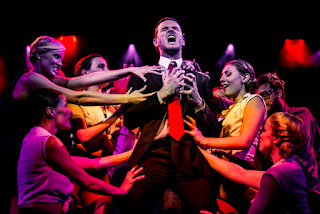 The cast is headed by Greg Patmore, who plays Eric Molton, a man who has lost everything and holds the modern world in contempt. Patmore’s credits include The Assets (ABC), Law And Order (Kudos), Vera (ITV), Hatfields And McCoys (with Kevin Costner, History/Sony/Think Factory), Coronation Street (Granada), Hanrahan Investigates (Channel 5), Hollyoaks In The City (Mersey TV) and he is best known to us as the voice of the wolf-splice detective Kurt Lobo (Spokenworld).

Enter the competition to WIN a luxury stay at THE WALDORF ASTORIA CALEDONIAN, EDINBURGH plus an hours spa treatment for 2 people.

Stop the Train runs from 15-20th and 22-28th August 2016 at Sanctuary at Paradise Green in Augustines (Venue 152) Book tickets at https://tickets.edfringe.com/whats-on/stop-the-train-the-musical and find out more from www.stopthetrainmusical.com

Images - Stop the Train
Email ThisBlogThis!Share to TwitterShare to Facebook