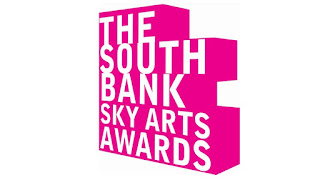 Winners of the 20th South Bank Sky Arts Awards were announced at a prestigious star-studded ceremony in London yesterday...

Eddie Izzard was presented with the Outstanding Achievement award by Lenny Henry, joining previous winners from Tracey Emin to J.K Rowling. Host of the awards Melvyn Bragg said “Eddie Izzard is a marvel. He works across such a wide waterfront with an unmatchable, often uncatchable style and wit. We're delighted that he joins the ranks of those who have won this Outstanding Achievement Award.”

The Times Breakthrough Award went to UK rapper Stormzy who joins previous recipients Tom Hiddleston and Billie Piper as this year’s artist pinpointed as being on the brink of widespread success.

In the TV categories, Sharon Horgan and Rob Delaney’s Catastrophe was awarded Best Comedy, seeing off tough competition from Peter Kay and Michaela Coel. While Best Drama, Doctor Foster, starring Suranne Jones, continued its remarkable run of success with a coveted award - marking a second consecutive win for writer Mike Bartlett, who won in 2015 for his play King Charles III.

This year Reece Shearsmith took to the stage to receive the Theatre award for the Royal Court’s production of McDonagh’s Hangmen.

Andrew Haigh’s bitter sweet love story 45 Years starring Charlotte Rampling and Tom Courtenay won Best Film, beating off stiff competition from Brooklyn and Ex Machina. In Literature Sunjeev Sahota’s second novel, The Year of the Runaways was chosen as the winner. Pop was picked up by poet and singer songwriter Benjamin Clementine, Visual Art by Lynette Yiadom-Boakye for her exhibition at the Serpentine Sackler gallery and Opera by the ENO for Calixto Bieito’s production of Verdi’s Force of Destiny.

It was a good year for the Arts in the regions with Northern Ballet taking home Best Dance for their production of 1984 (read our review of the performance) and Liverpudlian composer Mark Simpson succeeding in the classical category. Mark Simpson is a previous recipient of the Sky Academy Arts Scholarship, and the winning piece “The Immortal” was composed as his Scholarship project in 2014-15.

The five winners of this year’s Sky Academy Arts Scholarships were also announced by Melvyn Bragg at the ceremony, supporting five emerging artists with £30,000 funding and mentoring to take their careers to the next level. Scholarships were presented to: Yinka Ayinde (Creative Producer from London), Sarah Grant (Animator from Glasgow), Jasdeep Singh Degun (Indian Classical Sitarist and Composer from Leeds), Caitlin McLeod (Theatre Director from London) and Gearoid O’Dea (Visual Artist from Dublin). Sky Academy Arts Scholarships are part of Sky Academy, which works with young people from primary school right through to starting their career, using the passion Sky shares for TV, creativity and sport, to build skills and experience.

The event, which will be televised in full on Sky Arts on Wednesday, also included a world premiere performance by Tim Minchin from his upcoming musical Groundhog Day, an aria from Handel’s Rinaldo by celebrated lyric-coloratura mezzo soprano Joyce DiDonato and singer-songwriter Izzy Bizu performed a song from her forthcoming debut album ‘A Moment of Madness’

Winners were presented with a unique serpentine award designed by artist Polly Morgan to reflect the creativity the Awards have championed over the past 20 years.

Phil Edgar Jones, Director of Sky Arts said "Once again the range of creative talent on show at this year's South Bank Sky Arts Awards demonstrates the Arts are in rude health in the UK. We are delighted to be able to recognise a broad range of incredibly imaginative and talented people - and to announce our next set of Sky Academy scholars who will be receiving a £30,000 bursary, plus mentoring for a year to pursue their chosen practice and set them on the path to winning their own South Bank Sky Arts Awards in the future."

LITERATURE - Sunjeev Sahota, The Year of the Runaways