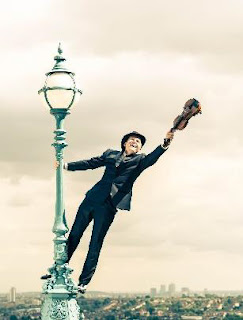 Fresh from his performance at the 2016 Olivier Awards, internationally acclaimed musician, performer and entertainer Joe Stilgoe brings Songs on Film to the 2016 Edinburgh Fringe Festival...

A consistent sell-out and firm festival favourite, Joe and his formidable trio of musicians will be paying a daily evening tribute at Assembly Checkpoint to a considered selection of the most iconic movie music of the past 100 years.

On returning to the Fringe in 2016, Joe Stilgoe said, “I can’t remember what August is actually like away from Edinburgh – it’s become a home from home for a twelfth of my year, and I wouldn’t have it any other way. Songs on Film is a celebratory ride through the greatest musical moments put to film, so it’s always a thrill to perform it at this brilliant festival where audiences are so in tune with popular culture and film, and quick to get references (no matter how obscure). I’ve tried to make this show feel like the best cinema trip there ever was.”

A self-confessed film buff, Songs on Film sees Joe add his own innovative and stylish orchestrations to the most memorable musical moments in cinematic history. A collision of music, improvisation and comedy, Songs on Film takes you from Hollywood’s golden age to the classic films of the 80s, through to the contemporary work of Tarantino, the Coen Brothers and Pixar, in a show of virtuosic musicianship, breathtaking theatricality and wit.

This is a show which challenges the notion of what a jazz-based trio can achieve in live performance – playing like demons and singing like angels, easily covering the myriad of different genres that the world of film offers. Evoking the nostalgia of cinema from his childhood, while subverting and playing around with well-known classics, Stilgoe puts his own spin on each song, and this unique show will leave you inspired, enthralled and entertained.

Joe has been enjoying a very busy 2016 – on top of his stellar performance at the 2016 Olivier Awards, he has also appeared on BBC Radio 2’s Friday Night Is Music Night: Fabulous Films of the Fifties, presented his own shows on JazzFM and at the BBC’s Young Jazz Musician of the Year on BBC4. He is set to present his own Friday Night is Music Night for BBC Radio 2 in July entitled Joe Stilgoe - Jump, Jive & Swing, before taking Songs on Film out on its debut UK tour in the autumn.