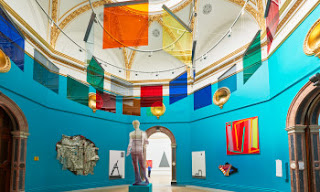 Comprising a range of media, the Summer Exhibition, the world’s largest open submission exhibition, provides a unique platform for emerging and established artists and architects to showcase their recent work to an international audience. As this year’s coordinator, Wilson will present a varied and thought-provoking Summer Exhibition, integrating work by renowned artistic duos.

Wilson has invited a diverse group of more than 15 international artistic duos, whose work he has long admired and which also reflects his interest in the making process, to exhibit throughout the Royal Academy’s Main Galleries. Highlights include a new, large-scale, suspended kite sculpture by Heather & Ivan Morison and two hand-coloured prints from the Human Rainbow II series (2014) by Jake & Dinos Chapman. Jane & Louise Wilson will create an atmospheric photographic installation, using a number of large-scale works from the artists’ seminal series Chernobyl (2010 – 2012); this new installation will be displayed around the Royal Academy’s main staircase leading up to the Summer Exhibition. Further participating artistic duos include Ilya & Emilia Kabakov, EVA & ADELE, Boyd & Evans, Tim Noble & Sue Webster, Langlands & Bell and Pierre et Gilles, among others.

Wilson has also invited Turkish filmmaker and artist Kutluğ Ataman to display a major work within the Summer Exhibition. Kutluğ Ataman’s monumental multi-image video installation THE PORTRAIT OF SAKIP SABANCI (2014), which forms part of the Sabancı University Sakıp Sabancı Museum Collection, Istanbul, will be exhibited. Previously displayed in The Arsenale at the 56th International Venice Biennale in 2015, the video installation was originally commissioned by the Sakıp Sabancı family in 2011 to mark the ten-year anniversary of the passing of Turkish business leader and philanthropist Mr. Sakıp Sabancı. It is formed of approximately 10,000 LCD panels - each one an individual portrait of one of the tens of thousands of people who crossed paths with him.

As part of the Summer Exhibition 2016, architect and sculptor Ron Arad RA will create a new site specific installation for the RA Courtyard. Spyre is a 16-metre high corten steel oval cone, hiding motors, cogs, and slew-rings. Each segment of Spyre will move at different speeds, ensuring that the unpredictable acrobatic postures of the installation are never repeated. At the tip of Spyre is an eye holding a camera, the footage from which will be relayed to a screen at the Royal Academy.

This year the Royal Academy received 12,000 entries, from which a committee of Royal Academicians will make a selection to hang on the walls of the Main Galleries in Burlington House.

Over 1,200 artworks will go on display, the majority of which will be for sale offering visitors an opportunity to purchase original artwork by high profile and up-and-coming artists. For the very first time, editions of artworks on display at the Summer Exhibition 2016 will be available to purchase online via the RA’s website.

One of the founding principles of the Royal Academy of Arts was to 'mount an annual exhibition open to all artists of distinguished merit' to finance the training of young artists in the Royal Academy Schools. The Summer Exhibition has been held every year without interruption since 1769 and continues to play a significant part in raising funds to finance the current students of the RA Schools.

The RA Schools is the longest established art school in the UK and offers the only free three-year postgraduate programme in Europe.

Richard Wilson RA, coordinator of the Summer Exhibition 2016, said: “The Summer Exhibition 2016 will be unpredictable, stimulating, and enjoyable with 10 startling rooms of contemporary art submitted from around the world by members, non-members and honorary invitees. Each of the rooms will be hung by a member of the committee, resulting in themes of free speculation, practice or technique. As part of this year’s exhibition, I have invited a diverse group of international artistic duos to participate with new or recent work. It cannot be over emphasised that profits from the exhibition will go towards funding the postgraduate programme at the RA Schools.”


The Royal Academy of Arts Facebook page shared a sneak preview of the exhibition, below, and you can find more information on their website.

Admission prices include the List of Works giving details on every exhibit in the show.