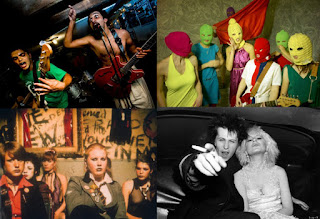 This August BFI Southbank will host Don Letts Presents: Punk on Film, a season of films curated by the film director, DJ and musician Don Letts...

The season will bring together a broad range of documentary, archive footage and feature films that draw attention to the diversity of the punk movement, how it has been depicted on film, and its huge influence on filmmakers past and present. Films being screened during the season will include Don Letts' Grammy award-winning doc The Clash: Westway to the World (2000), Jubilee (Derek Jarman, 1978) and Pussy Riot: A Punk Prayer (Mike Lerner, Maxim Pozdorovkin 2013).

Season curator Don Letts explains: “Punk is about individuality, empowerment and freedom – it’s a liberating attitude towards work, life and art. Punk’s DIY ethos taught me that a good idea attempted is better is than a bad idea perfected. But in a cultural climate that feels like punk never happened the more pertinent question is – where is punk today?”

Don Letts presents: Punk on Film will look at the influence of punk on politics and contemporary culture with screenings of the searing documentary Sleaford Mods – Invisible Britain (Nathan Hannawin, Paul Sng, 2015), which follows the British punk band around the country, swearing and ranting about politicians and austerity; this film catches them on their 2015 UK tour, playing to audiences that clearly share their disgust with the established order. Inspiring feminist punk band Pussy Riot and the ultimate ‘Riot Grrrl’ Kathleen Hanna (of Bikini Kill and Le Tigre) are the subject of rousing documentaries Pussy Riot: A Punk Prayer (Mike Lerner, Maxim Pozdorovkin, 2013) and The Punk Singer (Sini Anderson, 2013).

On Sunday 7th August, world Punk day, the season will take a day to explore the impact of the counter culture movement across the globe with World Punk Day. Director James Spooner looks at issues of racial identity in the punk scene with his debut Afro-Punk (2003), documenting the experiences of black punk rockers across America including members of TV on the Radio and Dead Kennedys. Three years in the making, Taqwacore: The Birth of Punk Islam (2009) follows the progression of the Muslim Punk scene: from its imaginary inception in a novel written by Michael Muhammad Knight to a full-blown, real-life scene of Muslim punk bands and their fans. This film follows Michael and his band of Muslim punks as they journey across the U.S. and Pakistan, transforming their worlds, their religion and themselves through the spirit of Taqwacore. Punk in Africa (2012) presents the previously untold story of how punk spread from Zimbabwe to Mozambique. Exploring the impact of bootlegged copies of the Sex Pistols and rise of multi-racial punk bands formed in South Africa inspired by political anger following the Soweto Uprising in 1976.

Key screenings throughout the seasons will also be accompanied by Q&As with influential figures from the punk movement. A screening of Punk in London (1977) will be followed by a Q&A with director Wolfgang Büld and roadie to The Clash and the Sex Pistols, Stephen ‘Roadent’ Connolly. Fashion historian Amber Butchart hosts a discussion on punk fashion with writer and fashion expert Paul Gorman, model and actress Jordan (Pamela Rooke) and music journalist Dorian Lynskey after a screening of The Filth and the Fury (2000). Continuing insight into punk’s influence on fashion, writer and director Phil Strongman will take part in an onstage interview following his documentary Anarchy!: The McLaren Westwood Gang (2013). Season curator Don Letts will take part in Q&As following screenings of his films The Clash: Westway to the World (2000) and Punk: Attitude (2005), as well as introducing a screening of The Harder They Come (1972) starring Jimmy Cliff, during which Letts will explore the unique intersection between punk and the Jamaican music scene.

The season will also include iconic films from pioneering filmmakers such as Derek Jarman (Jubilee, 1978) and Kenneth Anger (Scorpio Rising, 1964); films that embrace punk’s DIY ethos including Faster Pussycat... Kill! Kill! (Russ Meyer, 1965) and Eraserhead (David Lynch, 1977); and features and documentaries which feature seminal punk bands such as Sid and Nancy (Alex Cox, 1986) and End of the Century: The Ramones (Jim Fields, Michael Gramaglia, 2003).

Death is Their Destiny (1978) – Courtesy of BFI Player / Phil Munnoch
Email ThisBlogThis!Share to TwitterShare to Facebook