News - Ove Arup and the Philosophy of Total Design 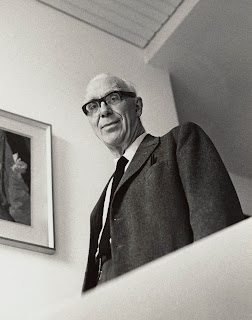 Part of their Engineering Season, the V&A celebrates the life and legacy of the 20th century’s greatest engineer, Ove Arup (1895-1988), with the first ever retrospective on the philosopher-engineer which opens tomorrow...

Through his pioneering philosophy of Total Design, which for him meant to ‘join all the professions right from the start’, Ove Arup redefined the way architects, designers and engineers work together. The exhibition, staged in cooperation with the global engineering and design consultancy Arup, reveals the untold stories behind some of the world’s most recognisable buildings, and shows that without Ove Arup and his firm, projects like the Sydney Opera House, Centre Pompidou in Paris and Crossrail would never have been built. Part of the V&A Engineering Season, the exhibition features over 150 previously unseen prototypes, models, archival materials, drawings, film and photography, as well as new immersive digital displays featuring animations, simulations and augmented reality to showcase over 100 years of creativity, engineering and architectural design.

Ove Arup was the pioneer of a multidisciplinary approach to design that has defined the way engineering is practiced today. Training first in philosophy, and with a highly poetic and imaginative sense of design, Ove revolutionised the fields of civil and structural engineering. The V&A presents a selection of Arup’s ground-breaking projects over the last century, including collaborations with leading architects like Berthold Lubetkin, Renzo Piano, Richard Rogers and Norman Foster. It also explores the pioneering work undertaken by Arup worldwide today, including major infrastructure projects like Crossrail, currently Europe’s largest underground railway, innovative technologies for acoustics studies like SoundLab® and SolarLeaf, an experimental bio-reactive façade system that uses microalgae to generate renewable energy. The exhibition immerses visitors in the creative and collaborative work of engineers, architects and designers who, together, design our buildings, cities and urban systems.

Maria Nicanor and Zofia Trafas White, co-curators of the exhibition, said, “Ove Arup was the greatest engineer of the 20th century. Unconventional and playful in his approach, his collaborative working style revolutionised building design during his lifetime and influenced how buildings are made today. Ove Arup’s career began at the height of the Modernist Movement in the 20th century and went on to last over five decades. The exhibition will paint a picture of the man whose ideas led to the creation of one of the most innovative and influential engineering consultancies working today. It will also present Arup’s contributions to nearly 100 years of developments in engineering and architectural design. Engineering the World will shed new light on the behind-the-scenes engineering stories that made possible some of the world’s most iconic buildings.” Tristram Carfrae, Deputy Chairman of Arup, added, “Ove Arup founded our firm with a highly original vision, combining philosophy and engineering to create a holistic approach to design that he called ‘total architecture’. Given the significant challenges the world faces, this pioneering approach to engineering design has never been more relevant than today. For his life and our on-going work to be recognised and celebrated by such a world renowned institution as the V&A is very gratifying. It demonstrates how Ove was a pioneer of his time and how the firm continues to follow his pursuit of creativity and innovation based on world class expertise. The V&A tells this story beautifully and we feel sure this exhibition will be an inspiration to the next generation of engineers, designers and all those interested in the built environment.” 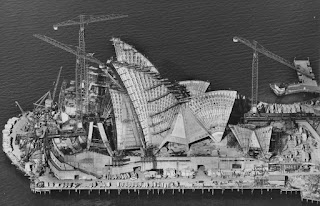 The exhibition begins with Ove’s early career during the burgeoning Modernist design movement and his education in philosophy, mathematics and engineering. It explores the profound effect his relocation to London in 1923 had in shaping his understanding of modern engineering practice, through encounters with leading architectural theorists like the Bauhaus founder, Walter Gropius, and Le Corbusier, as well as his collaborative projects with experimental architects Tecton Group. Technical studies and models for early projects like the Penguin Pool at London Zoo, and a lithograph portrait of Ove Arup by Le Corbusier are on display. While memorabilia from Ove’s personal drawing collection sheds light on his sense of humour and charisma, including his original doodles and doggerel – hand drawn sketches that often accompanied his fanciful poems and notes.

The exhibition profiles Ove’s career over five decades across the 20th century – a time of great social, political and technological change and the cataclysmic Second World War. Guided by Ove’s own writings on his philosophy of Total Design, it explores the principles he set out for his firm and the company’s evolution into a breeding ground of talent and experimentation.

Ove’s contribution to the war effort is explored through his radical designs for improving inadequate wartime air raid shelters and crucial work on the Mulberry temporary harbours deployed during the D-Day landings in France in 1944, built to facilitate rapid offloading of soldiers and cargo. The story of the Sydney Opera House reveals the key engineering idea that made its completion possible – the first ever application of computer-generated calculations to a building project. On show is the original Ferranti Pegasus computer used by Arup engineers that is said to have saved ten years of manual calculations, as well as preliminary sketches, technical drawings, models used for stress testing, and unseen original calculations for the gravity-defying roof. A showcase of the Pompidou Centre explores the Arup engineer team’s contribution to the design of the building’s most distinctive feature – its external structure and exposed services – and the creation of a new architectural style where the engineering of a building defined its appearance.

Ove strongly believed that ‘design should embody a sensible way of building’, and encouraged an approach that united invention with functionality and a respectful use of resources. The exhibition features the firm’s collaborations with leading emerging architects that pioneered new approaches to construction that are still in use today. These include Arup’s collaboration with Foster + Partners on the Hong Kong and Shanghai Bank HQ, which used unprecedented elements of prefabricated construction, and the Kansai International Airport Terminal Building that united structural design with environmental engineering concerns. The last ever project completed by Ove himself, the Kingsgate Footbridge in Durham, near his birthplace of Newcastle, illustrates the essence of his Total Design ideals.

This section examines Ove’s legacy and highlights recent projects by Arup showing how cutting-edge engineering solutions are transforming our built environment. Major infrastructure projects such as Crossrail are brought to life via a new digital interactive map showing underground tunnelling allowing visitors to navigate through London’s underbelly. Arup’s new technologies for acoustics and environmental sound studies are showcased through immersive simulations, including a recreation of an Arup SoundLab® presenting case studies for concert halls and studies for the much-debated HS2 railway route. The exhibition also looks at Arup’s engineering solutions for open source housing design, including the firm’s recent collaborations with Architecture 00 on WikiHouse, as well as innovative crowd flow analysis projects undertaken for cultural attractions around the world, including the V&A.

The exhibition and V&A Engineering Season is co-curated by Maria Nicanor and Zofia Trafas White from the V&A’s Design, Architecture and Digital department and is on from 18 June – 6 November 2016


Images and for more info and tickets - V & A Museum
Email ThisBlogThis!Share to TwitterShare to Facebook