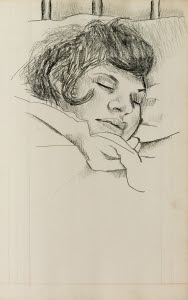 A selection of drawings from the unseen sketchbooks of Lucian Freud, together with a newly-discovered self-portrait by the artist, have gone on display for the first time at the National Portrait Gallery...

Lucian Freud Unseen (13 June -6 September 2016) reveals a small selection from this important archive of letters and 800 drawings, dating between the 1940s and the 1990s, allocated to the National Portrait Gallery, which in 2012 staged the acclaimed Lucian Freud Portraits, the Gallery’s most visited ticketed exhibition. A National Portrait Gallery book containing a larger selection of sketchbook drawings will be published 7 July 2016.

Some studies on display are connected to major works by Freud including one sketchbook containing a drawing of Lady Caroline Blackwood that relates to Freud’s 1954 masterpiece Hotel Bedroom; while another relates to a detail from Large Interior, W11 (after Watteau), 1981-3.

Several drawings are portraits of recognisable sitters, such as Lord Goodman, whose more finished drawing is in the Gallery’s Collection. Also included in the display is a sketch inspired by the work of one of his daughters, a cover for Esther Freud’s 1992 novel, Hideous Kinky.

Early drawings, in a range of media including pencil, charcoal, pastel, watercolour and pen and ink, chart Freud’s boyhood in Berlin before the family emigrated to London in 1933. Rendered in vivid colour, the drawings reflect early passions and interests such as birds and trees, which were to become recurring themes in Freud’s work. Also displayed from a collection of letters dating from Freud’s teenage years is one from post-war Paris written to his mother, Lucie.

Lucian Freud Unseen also includes the first display of the recently discovered unfinished self-portrait, also accepted in lieu of inheritance tax from the estate of the artist and allocated to the National Portrait Gallery.

The self-portrait fragment, thought to date from the mid-1980s, is a rare example of an unfinished painting by the late artist and bears a close resemblance to Reflection (Self-Portrait), 1985, in its direct pose and composition, which would suggest that it was painted around the same date.

Self-portraits were a consistent thread running through the artist’s work from his teenage years until the end of his life. They represent one of his greatest artistic achievements, yet there are very few examples in UK public collections.

The unfinished self-portrait is an important addition to the Gallery’s collection of Lucian Freud portraits, and provides an interesting counterpoint to its earlier self-portrait, which dates from 1963. The Gallery also has a charcoal drawing by Freud of Lord Goodman; and the artist is represented as a sitter by a sculpture by Sir Jacob Epstein, drawings by Frank Auerbach and David Hockney, and many photographs.

To coincide with Lucian Freud Unseen, Freud’s painting Girl in Bed, a loaned oil portrait of his second wife Lady Caroline Blackwood, who is also represented in the new sketchbooks display, can be seen in the Twentieth Century Collection displays on the Balcony.

Lucian Freud (1922–2011) was one of the most important and influential artists of his generation and the sketchbooks spanning his career from the mid-1940s up until his death provide invaluable insight into his working practice and will be a major resource for the study of his work.

Sarah Howgate, Senior Curator, Contemporary Collections, National Portrait Gallery, and Curator of Lucian Freud Portraits, the last exhibition of his works exhibited at the gallery in 2012, says: ‘This exciting and extensive body of valuable material will greatly expand our holdings of works by Freud in our Collection and help us to further understand the studio practice of an artist whose focus and preoccupation was the portrait.’